The Prevention and Control of Robbery 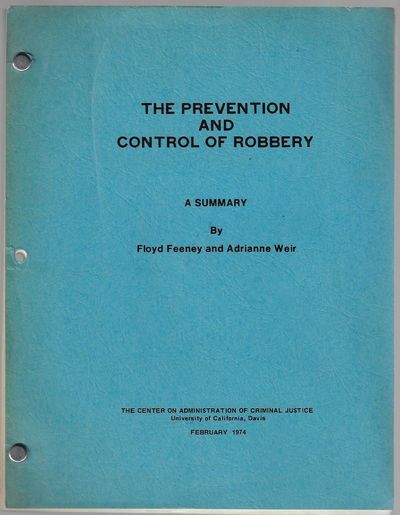 by Feeney, Floyd; Weir, Adrianne
Davis, CA: Center on Administration of Criminal Justice, University of California, Davis, 1974. Hardcover. Very Good. 87 pp, in original wrappers. Some light handling wear, middle binding fastener missing; text clean. Organized into five sections: the robbery setting; the handling of robbery arrestees; the geography of robbery, the response of the police and other agencies to robbery, and the history and concept of robbery. Interestingly, the study begins with the assertion that "there can be little doubt that citizens are today less safe in the streets than they were two decades or even one decade ago. The populace on the whole knows this and is concerned about it." They cite a rise in robbery of 250 percent between 1960 and 1972. This study, intended to explore the patterns of robbery and criminal justice response to it in the United States, used the city of Oakland, California as a case study. (Inventory #: 3106)
$40.00 add to cart or Buy Direct from Walkabout Books
Share this item