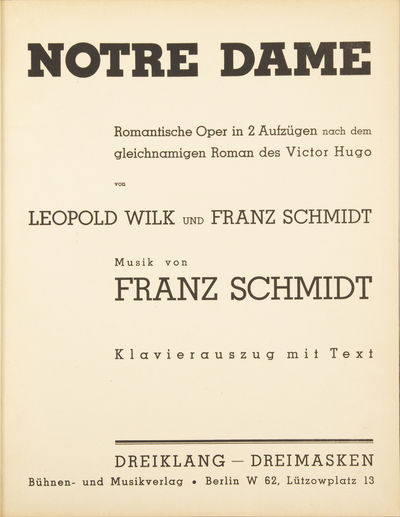 Notre Dame, to a libretto by Leopold Wilk and the composer after Victor Hugo's novel, premiered in Vienna at the Hofoper Theatre on April 1, 1914.

Franz Schmidt was a highly respected cellist, pianist, composer, and conductor in the early 20th century and spent his career primarily in Vienna. In 1901, he began teaching at the Vienna Conservatory (later the Hochschule) where he remained until the late 1930s. "He absorbed all the important elements of the Hungarian idiom to the point that it became a constant part of his personal style. It is also evident in the first, second and fourth symphonies, in the quintets, in the Variationen ?ber ein Husarenlied and most notably in his first opera Notre Dame, where it is used to characterize the gypsy Esmeralda: Karl Goldmark described the famous Intermezzo as 'the most beautiful of gypsy music'." Carmen Ottner in Grove Music Online. (Inventory #: 32160)
$94.00 add to cart or Buy Direct from
J. & J. Lubrano Music Antiquarians
Share this item