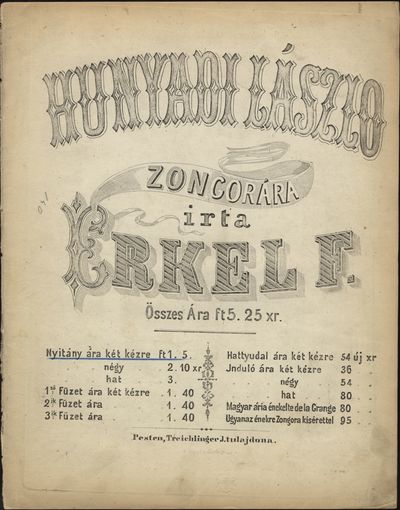 Publisher's blindstamp to foot of title.

Hunyadi László, to a libretto by Béni Egressy after Lőrinc Tóth's play, was first performed in Pest at the National Theatre on January 27, 1844.

"Erkel, who conducted many French and still more Italian operas (especially those of Bellini and Donizetti), was of course influenced by them; he also had the greatest respect for Mozart and Beethoven. Hunyadi László includes numbers that clearly show Italian influence. More important, while some of the roles are mere types, several are well-characterized figures who are often differentiated by the use of motifs (among other devices). Erkel had considerable skill as dramatist and was able to employ a symphonic technique to achieve an organic unity. There is also a strikingly large amount of recitative, all of it accompanied; the motifs, used in both the lyrical music and the recitative to characterize situations, individuals and states of mind, to a large extent assure the dramatic coherence of Hunyadi László." Dezső Legány in Grove Dictionary of Opera. (Inventory #: 32272)
$66.00 add to cart or Buy Direct from
J. & J. Lubrano Music Antiquarians
Share this item