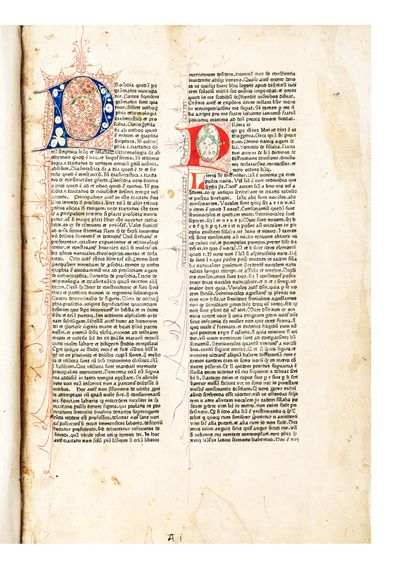 by BALBUS, Johannes
Gothic type, double column, 66 lines (33 line-pairs). [373] leaves. Decoration by a contemporary Dutch or Westphalian artist (see below). Eight pinholes to the sheet preserved. Royal folio (385 x 270 mm.), mid-18th cent. French red morocco over heavy boards, triple gilt fillets round sides, spine nicely gilt, a.e.g. Mainz: [Peter Schoeffer], 1460 [but ca. 1469]. Second impression (of three) of the original edition, first printed in 1460, in which Gutenberg first used the revolutionary method of two-line printing slugs, thereby finding "a solution to the challenge of permanently fixing typographical compositions" (Needham, p. 432). The Catholicon was not printed with movable type, Gutenberg's first great invention, but with units of paired lines or "slugs." It is an early form of stereotyping or linotype setting. The method was as follows: as composition in type of the Catholicon progressed, a secondary casting was made in units of paired lines or "slugs" in order to allow future reprinting without the expense of resetting the text. As mentioned above, there are three distinct impressions of the Catholicon, all printed from the same setting of type - "down to the most minute details" (Needham, p. 423) - but on distinct presses and using different paper stocks: 1. the 1460 impression, by Gutenberg, is printed on vellum or Bull's Head paper; 2. our second impression, using the slugs created by Gutenberg, was printed by Peter Schoeffer on Galliziani paper from Basel; and 3. a third impression, probably printed by Schoeffer ca. 1472, on Tower- and Crown-watermarked papers. This is the first book to name its place of printing, and is also the first book to refer in print to the invention of movable metal type (from the colophon): "With the help of Omnipotent God, at Whose very nod the tongues of infants are made eloquent, and Who often reveals to the humble what He withholds from the wise - this excellent book, Catholicon, has been printed in the goodly city of Mainz, in the glorious German nation..., and it has been brought to completion in the year of our Lord's incarnation, 1460 - not by means of reed, stylus, or quill, but with the miraculous concurrence of punches and types cast in moulds..." In 1905, Zedler first defined the three impressions but offered no explanation. Paul Needham was the first since Zedler to re-examine all bibliographical aspects of the Catholicon Press productions. When he first published his findings in The Papers of the Bibliographical Society of America (1982), the article, which is really a wonderful example of bibliographical detective work, changed the methods of other incunabulists and added to the perception of Gutenberg's genius. Dr. Needham concluded the following: "The Catholicon printer's three books were not printed with movable types. The type pages of these books were composed of indissoluble two-line slugs, arranged into columns or pages as the case may be. After printing, the slugs were retained, and at later times additional impressions were pulled from them...The Catholicon slugs were printed at three separate times, as the three different paper supplies of the copies indicate. The Bull's Head and vellum impression was completed in 1460, as its colophon states. The Galliziani impression [our edition] was printed in the late 1460s; this impression omitted the first slug of the text, the two-line incipit. The Tower-Crown impression was printed about 1472 or after, and also omitted the first slug" (p. 425). TEXT: The Catholicon is a Latin dictionary with grammar compiled by a Genoese Dominican, Johannes Balbus (d. 1298), who dated the completion of his work 7 March 1286. It remained the standard Latin dictionary until the 16th century and was apparently the first lexicographical work to achieve complete alphabetization from the first to last letter of each word. DECORATION: by a contemporary Dutch or Westphalian artist: 12-line penwork initial P (fol. 1r) in blue and white, with green and red infill and red surround extending down the entire inner margin, 9-line penwork initial P on the same page in red, with violet and green infill and surround; 4-13-line initials in blue and white, or in red with penwork surround, 1-3-line red lombards, paragraph-marks and capital-strokes, initial L on 24/1v omitted and later supplied in black ink, rubrication entirely omitted from 13/10r and 18/7r. BINDING: mid-18th-century French gold-tooled red morocco over pasteboard, triple fillets on sides, spine decorated in compartments with floral ornament and lettered, marbled endpapers, probably bound for the Duke of La ValliÃ¨re. PROVENANCE: quire signatures and occasional marginalia in a 16th-century hand; ?Polling, Augustinian Canons Regular, 1765 exchange; ?to the Duc de la ValliÃ¨re, by exchange for five early manuscripts approved by Polling's Prior, Franz TÃ¶psl; Louis-CÃ©sar de la Baume-le-Blanc, Duc de La ValliÃ¨re, the greatest book collector of the 18th-century (1767 auction of duplicates, lot 2289, fr. 474); George Hibbert (1829 Evans sale, lot 812, Â£36-4-6 to Payne & Foss); Beriah Botfield, purchased for Â£45 (pencil inscription, P.& F. Acquisitions p.15); sold Christie's London (Longleat, 13 June 2002, lot 9, Â£215,650 or $317,000). La ValliÃ¨re also owned two other paper copies: De R 90.53 (third impression, now Austrian National Library) and De R 90.72 (imperfect, "disparu"), as well as a vellum printing (De R 90.1, now British Library IC.301). A fine, fresh, and handsome copy. Extreme inner margin of first leaf strengthened, small tear in its lower blank margin mended, recto lightly soiled; minor repair to extreme margins or corners of ten other leaves not affecting text, tiny hole in 16/4 affecting three letters; rubricator's stain on 11/6v, small stains on 8/3-9, 22/8v and 33/10v. â§ Paul Needham, "Johann Gutenberg and the Catholicon Press" in Papers of the Bibliographical Society of America, Vol. 76, Fourth Quarter (1982), pp. 395-456. Goff B-20. (Inventory #: 6998)
$600,000.00 add to cart or Buy Direct from
Jonathan A. Hill, Bookseller
Share this item
Jonathan A. Hill, Bookseller, Inc.
Offered by