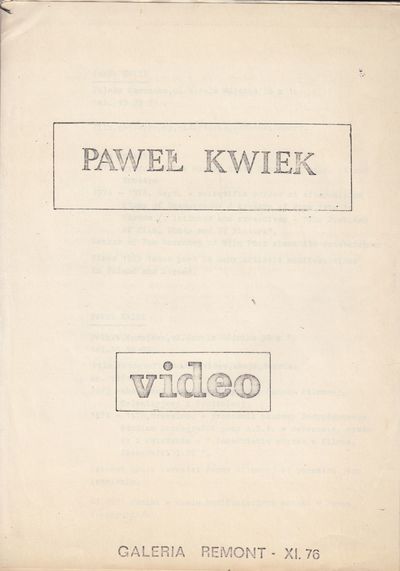 by Kwiek, Pawel
[Warsaw]: Galeria Remont, 1976. Quarto (A4). 17 unnumbered leaves of offset-reproduced typescript and drawings, printed rectos only; stapled to upper left corner. About very good. Scarce catalog documenting the video works of Pawel Kwiek, with an artist's statement, descriptions, and sketches documenting "Video A," "Video C," and others. Born in 1951, Kwiek is a contemporary artist active in the genres of film, photography, and action art, as well as a poet and art theoretician. He is considered to be the first Polish video artist, and was co-founder of the Workshop of Film Form (Warsztat Formy Filmowej), which interrogated the relationship between cinema, politics, and contemporary art from 1970 to 1977, while also re-discovering the Polish pre-war avant-garde. The artist's statement in the present catalog describes his fascination with TV technology and speaks of his video art as constructing "schemes which are transmitting the picture of reality in a way impossible for man, for whom the picture of reality is his transmitted picture" See: Marika Kuźmicz and Łukasz Ronduda, Workshop of the Film Form. Warsztat Formy Filmowej (2018), and 1, 2, 3... Cinematographer's Exercises. Paweł Kwiek. Photography, Film, Video (Warsaw, 2013). As of March 2020, not found in KVK, OCLC. (Inventory #: 50409)
$750.00 add to cart or Buy Direct from
Bernett Penka Rare Books
Share this item