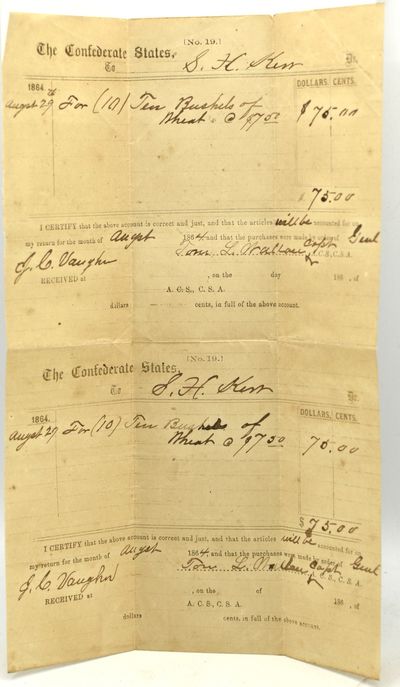 by James Skinner Oden; W. R. Dunlap; Thomas Lafayette Rosser; Tom L. Wallace; John C. Vaughn | Samuel X. Kerr
Middlebrook, Virginia, 1864. Two impressment certificates, to Samuel Xerxes Kerr of Middlebrook, Virginia. Beginning in March 1863, the Confederate government legalized the seizure of food, goods, and enslaved peoples to support the war effort, with impressment agents buying goods at reduced prices, and offering paper certificates if payment could not immediately made. One certificate is for a black artillery horse to serve in Stuart's Horse Cavalry, valued at 1,000 Confederate dollars, acquired by W. R. Dunlap, agent of Brig. Gen. [Thomas Lafayette] Rosser, signed and written by quartermaster James S. Oden. The other certificate is for ten bushels of wheat, valued at $7.50 each, 'purchased' by Captain Tom L. Wallace, under the authority of Brig. Gen. John C. Vaughn, both of Tennessee. The certificates are dated November and August 1864 respectively. Well preserved examples of Confederate impressment certificates, one of the most demoralizing policies of the Confederacy alongside skyrocketing inflation and military losses. Nos. 1 and 19, with two examples of No. 1, and two examples on one leaf of No. 19. Loss to the edges of the second copy of certificate No. 1. Writing on each is reasonably legible, with a few examples of ink smudging. (Inventory #: 290958)
$250.00 add to cart or Buy Direct from
Black Swan Books
Share this item

London : Sampson Low, Marston, Searle and Rivington , 1890
(click for more details about IN DARKEST AFRICA OR THE QUEST RESCUE AND RETREAT OF EMIN GOVERNOR OF EQUATORIA (2 VOLUMES))

A CIRCUMSTANTIAL NARRATIVE OF THE CAMPAIGN IN RUSSIA, EMBELLISHED WITH PLANS OF THE BATTLES OF MOSKWA AND MALO-JAROSLAVITZ

Hartford : Sheldon and Goodrich , 1816
(click for more details about A CIRCUMSTANTIAL NARRATIVE OF THE CAMPAIGN IN RUSSIA, EMBELLISHED WITH PLANS OF THE BATTLES OF MOSKWA AND MALO-JAROSLAVITZ)
View all from this seller>