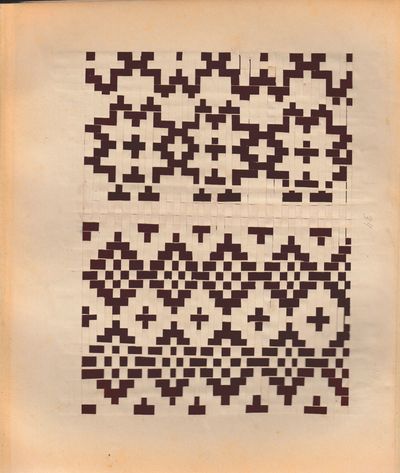 [Bohemia]: ca. 1900. Leporello comprising forty-seven leaves of plaited paper patterns, with between one and three patterns per plate, of white and brown paper strips, in original lettered boards, leaf size 19.5 × 17 cm. Boards a bit rubbed; first leaf with very light damage and soil; else about very good. This hand-made leporello contains forty-seven woven patterns composed of brown and white paper strips, displaying a wide range of possible combinations. Based on the pedagogical thought of Friedrich Wilhelm Fröbel (1782-1852), a student of Johann Pestalozzi, such pattern books became a common way to pass the time in the second half of the nineteenth century. Weaving was one of the activities Fröbel included in a set of playful practices for his original Kindergarten, a term coined by him. It was thought to develop dexterity as well as convey basic aesthetic sensibility through the use of simple geometrical arrangements, and quickly became as popular as embroidery and related pastimes among women of the upper class. With owner's, and presumably the creator's, name embossed on the front board: Jos. Bursiková. (Inventory #: P004258)
$375.00 add to cart or Buy Direct from
Bernett Penka Rare Books
Share this item