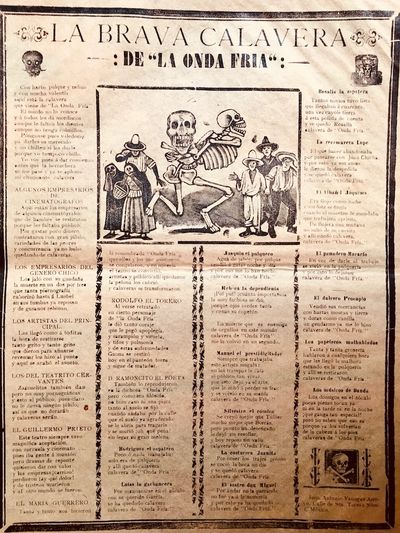 by [Posada, Jose Guadalupe]
Mexico City: Vanegas Arroyo, [N.d.]. Posada engraved broadside with text. (Full sheet, 16 x 11.5in) La Ondad Fria was a very popular pulqueria cantina in Mexico City at the turn of the 20th century. The engraving depicts a drunken (?) calavera figure carrying another calavera off, while bystanders mourn and wave goodbye. The text is a series of farewells from various groups, incl. theaters, movie theaters, bar-tenders (pulquereros), bakers, candymakers, etc. Printed on the cheap and thin paper usual for these, but in very good condition. (Inventory #: 7504)
$550.00 add to cart Available from Plaza Books
Share this item