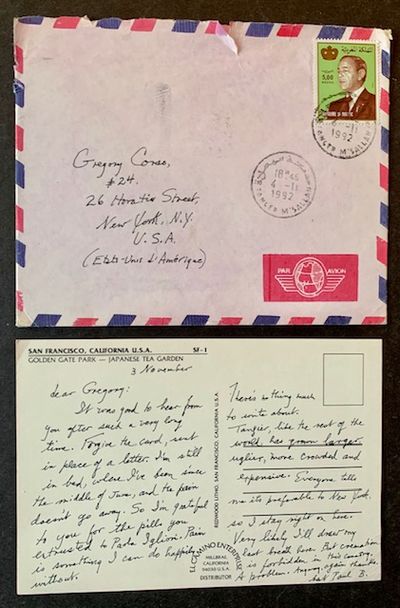 by Paul Bowles
1992. Original wraps. Near Fine. A wonderful piece of post-War literary ephemera, a dense, neatly-written postcard from Paul Bowles (at his Tangier residence) to Gregory Corso (in New York). Clean and Near Fine, dated November 3rd, 1992. "dear Gregory: It was good to hear from you after such a very long time. Forgive the card, sent in place of a letter. I'm still in bed, where I've been since the middle of June, and the pain doesn't go away. So I'm grateful to you for the pills you entrusted to Paola Iglioni. Pain is something I can do happily without. There's nothing much to write about. Tangier, like the rest of the world, has grown larger, uglier, more crowded and expensive. Everyone tells me it's preferable to New York, so I stay right on here. Very likely I'll draw my last breath here. But cremation is forbidden in this country. A problem. Anyway, again thanks. best, Paul B." The card is crisp and very sharp, as is the original light-pink, hand-addressed envelope which houses it and which shows 2 clear postmarks from Tangier. And the postcard's image is of the Japanese Tea Garden in Golden Gate Park, San Francisco. (Inventory #: 17971)
$650.00 add to cart or Buy Direct from Appledore Books
Share this item
Appledore Books
Offered by

Poets on Painters: Essays on the Art of Painting by Twentieth-Century Poets

by Edited by J.D. McClatchy

Berkeley, CA : University of California Press , 1988
(click for more details about Poets on Painters: Essays on the Art of Painting by Twentieth-Century Poets)

New York : ERandom House , 1982
(click for more details about The Random Review 1982: The Year's Best Fiction, Poetry and Essays (Signed by 7 of the Contributors and the Two Editors))
View all from this seller>