Juvenile Poems on Various Subjects. With the Prince of Parthia, a. 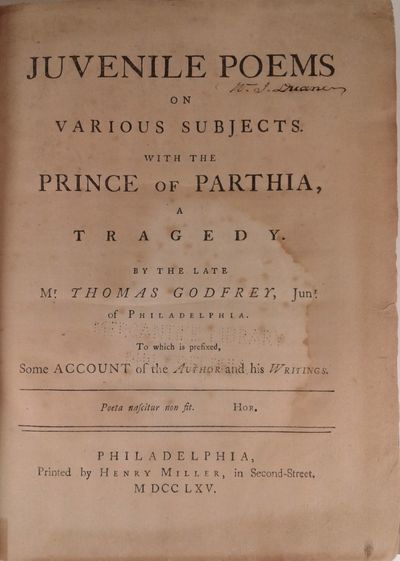 by GODFREY, THOMAS
1765. GODFREY, THOMAS. Juvenile Poems on Various Subjects. With the Prince of Parthia, a Tragedy ... To which is prefixed, Some Account of the Author and his Writings. Philadelphia: Henry Miller, 1765. 4to. xxvi, [2], 223 p. Neat modern cloth, leather spine label. Overall light browning of the text with some foxing, dampstains on first and last few leaves, two very faint old institutional perforation stamps. An entirely respectable, wide-margined copy of a book that is never found in fine original condition. First edition of one of the landmarks of early American literature. Written in 1759 when Godfrey was 22 years old, published in 1765 just shortly after his death at age 27, and produced at the Southwark Theatre in Philadelphia, the "Prince of Parthia" was the first play to be written, published, and produced by an American in America. "The publication of 'The Prince of Parthia' makes 1765 a landmark in American cultural history ... an important dramatic precedent in America...." (Two Hundred Years of American Plays, 1765-1964: An Exhibition Arranged to Celebrate the Bicentennial of the Publication of Thomas Godfrey's "The Prince of Parthia" (Brown University Library, 1965). Edited by Nathaniel Evans, himself an important early American poet who also died young, the work includes an introductory sketch of Godfrey and his writings, a postscript, list of subscribers' names, and a considerable selection of Godfrey's verse. The subscribers, chiefly in Pennsylvania, New Jersey, and North Carolina, include Benjamin Franklin and his son, Governor William Franklin of New Jersey, Governor John Penn of Pennsylvania, many students of "Jersey College," &c. Thomas Godfrey was the son of Thomas Godfrey, a friend of Franklin, one of the original Junto members, and the inventor of the quadrant. A very scarce book--only one copy, disbound and in mediocre condition--has appeared at major auction in the last fifty years. Evans 9983; Stoddard & Whitesell 176. (Inventory #: 15445)
$4,250.00 add to cart or Buy Direct from
Joseph J. Felcone
Share this item
Joseph J. Felcone Inc.
Offered by

1794
(click for more details about Book of Common Prayer ... According to the Use of the Protestant)
View all from this seller>