Visva-Bharati Bulletin No. 14 : Rabindranath Tagore's Visit to Canada [ and Japan ] [ with other articles ] 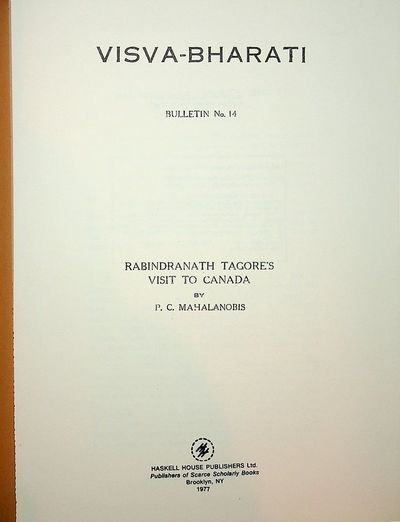 by Mahalanobis, P. C.; Tagore, Rabindranath
New York, NY: Haskell House Publishers Ltd, 1977. Later printing. Cloth. Fine. Later printing. [2], 73 pages. 4vo. Publisher's blue cloth with white spine titles. A new copy. Cloth. A reprint of the 1929 edition. While the title page just notes Canada, the running titles internally as well as the spine labeling add "and Japan" which clearly reflects the content. Continuously paginated, but with several additional sections: "Rabindranath Tagore's Visit to Canada and Japan" (pp 1-51), "The Philosophy of Leisure" (pp53-60), "India and Europe" (pp. 61-64), "Message of Farewell to Canada" (pp 65-68), and "Ideals of Education" (pp. 69-73). The first and longest article by Mahalanobis reports in some depth on Tagore's visit to Canada and Japan with many reports from period news articles. The later articles are by Tagore himself. "Rabindranath Tagore FRAS; born Robindronath Thakur, 7 May 1861 - 7 August 1941), also known by his pen name Bhanu Singha Thakur (Bhonita), and also known by his sobriquets Gurudev, Kabiguru, and Biswakabi, was a polymath, poet, musician, and artist from the Indian subcontinent. He reshaped Bengali literature and music, as well as Indian art with Contextual Modernism in the late 19th and early 20th centuries. Author of the "profoundly sensitive, fresh and beautiful verse" of Gitanjali, he became in 1913 the first non-European to win the Nobel Prize in Literature. Tagore's poetic songs were viewed as spiritual and mercurial; however, his "elegant prose and magical poetry" remain largely unknown outside Bengal. He is sometimes referred to as "the Bard of Bengal" (wikipedia) The Nobel Prize in Literature 1913 was awarded to Rabindranath Tagore "because of his profoundly sensitive, fresh and beautiful verse, by which, with consummate skill, he has made his poetic thought, expressed in his own English words, a part of the literature of the West." (nobel prize site). (Inventory #: 27778)
$50.00 add to cart or Buy Direct from Kuenzig Books
Share this item

Chicago : The Year Book Publishers, Inc , 1961
(click for more details about Anaesthetic Accidents : The Complications of General and Regional Anaesthesia ... Second edition)
View all from this seller>