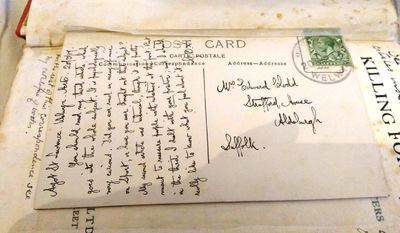 by (SHAW, George Bernard) SALT, Henry S. (editor)
London: G. Bell and Sons, Ltd., 1915. First Edition. Hardcover. Front hinge is cracking with the first two blanks detached; some glue stains and foxing to first and last pages, most of text clean. Gilt on the spine faded but still readable. Good. A scarce book with a preface by Bernard Shaw published for the Humanitarian League, an organization founded by Henry Salt and dedicated to human and animal rights. This is a most unusual and important copy of this book INSCRIBED by Shaw on the half-title page to animal rights promoter and author Phyllis Clodd, wife of prominent banker Edward Clodd, on 22 March 1917. In addition there is much material pasted in, mostly newspaper and magazine articles by Shaw on the subject covering the front and rear endpapers and pastedowns, with a few tipped in within the text. Also loosely tipped in opposite the title page is a photographic portrait postcard of Shaw with an AUTOGRAPH LETTER SIGNED on the verso from Shaw to Clodd dated 20 March 1917: "You should read my third article, which goes into the whole subject. It is psychologically very curious. Did you ever read an essay of mine on Sport, or have you ever thought out that subject? My second article was technical, though it was partly meant to reassure people with relatives at the front. But in the third I dealt with your position; and I should really like to know what you feel about it. G.B.S." There are a few ink notes on the articles and the endpapers that are likely in Clodd's hand.

The first paragraph from a review of the book in THE SOCIALIST REVIEW, May 1915: "It is a bold venture on the part of the Humanitarian League to issue this little volume at a time when the nation is still earnestly engaged in 'Killing for Business,' and there is evidence that the book has been held back by the war, since Bernard Shaw's preface is dated a year ago. But in England the Blood Sports continue, while the Blood Business goes on amain along two great lines drawn across Europe, and only the day before that on which these lines are penned the writer passed a field in which a posse of excited barbarians were watching the hounds draw the coverts in the hope of hunting a fox to death. Probably all these people had relatives at the front, engaged on what is perhaps the less degrading occupation of the two." (Inventory #: 019804)
$2,500.00 add to cart or Buy Direct from Charles Agvent
Share this item