Leaf from the New Testament, in Latin. From the Gospel of St. Luke. 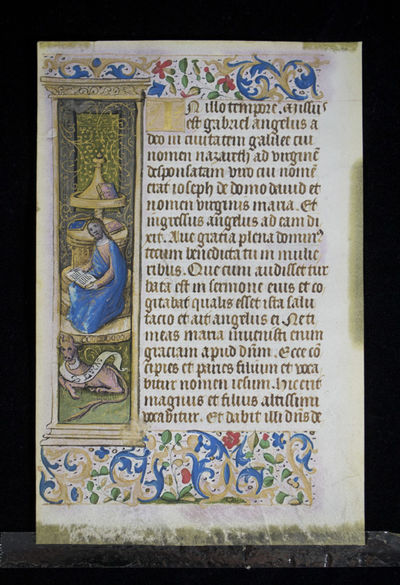 by ILLUMINATED MANUSCRIPT
Double Illuminated Manuscript Leaf With Miniature of St. Luke and the Gospel in which the Angel Gabriel Announces to Mary that She is Pregnant with Jesus [ILLUMINATED MANUSCRIPT]. Illuminated Manuscript Leaf from the New Testament, in Latin. From the Gospel of St. Luke. [presumed France: n.d., circa late 15th-century]. One octavo leaf (7 x 4 5/8 inches; 176 x 117 mm). On vellum, in a bold gothic hand. Recto and verso. Recto is Luke 1:26-1:32. This leaf is From the Gospel of St. Luke. The text is the important portion of the gospel in which the Angel Gabriel Visits Mary and announces that she is pregnant and will give birth to the Lord Jesus. Recto with a beautiful gilt and hand-colored miniature of Saint Luke, forming the left-most border. Within an architectural column, Luke is sitting at an alter, reading an open book. A cow rests at his feet with a sash reading "S LVCAS." Gilt and hand-colored foliate top and bottom border in red green blue and gilt. With twenty lines of manuscript in brown ink. A gilt two-line initial. Verso is twenty lines of manuscript in brown and rubrication. With a lovely two-line initial in blue and gilt. Two blue and gilt decorations within the text. Mounted to a mat, with old tape. Some unobtrusive discoloration along outer edges from tape. Overall a beautiful double-sided vellum leaf. Gospel According to Luke 1:26-1:32- {1:26} In mense autem sexto, missus est Angelus Gabriel a Deo in civitatem GalilÊÊ, cui nomen Nazareth, {1:26} Then, in the sixth month, the Angel Gabriel was sent by God, to a city of Galilee named Nazareth, {1:27} ad Virginem desponsatam viro, cui nomen erat Ioseph, de domo David, et nomen virginis Maria. {1:27} to a virgin betrothed to a man whose name was Joseph, of the house of David; and the name of the virgin was Mary. {1:28} Et ingressus Angelus ad eam dixit: Ave gratia plena: Dominus tecum: Benedicta tu in mulieribus. {1:28} And upon entering, the Angel said to her: ìHail, full of grace. The Lord is with you. Blessed are you among women.î {1:29} QuÊ cum audisset, turbata est in sermone eius, et cogitabat qualis esset ista salutatio. {1:29} And when she had heard this, she was disturbed by his words, and she considered what kind of greeting this might be. {1:30} Et ait Angelus ei: Ne timeas Maria, invenisti enim gratiam apud Deum. {1:30} And the Angel said to her: ìDo not be afraid, Mary, for you have found grace with God. {1:31} Ecce concipies in utero, et paries filium, et vocabis nomen eius IESUM. {1:31} Behold, you shall conceive in your womb, and you shall bear a son, and you shall call his name: JESUS. {1:32} Hic erit magnus, et Filius Altissimi vocabitur, et dabit illi Dominus Deus sedem David patris {1:32} He will be great, and he will be called the Son of the Most High, and the Lord God will give him the throne of David his father. And he will reign in the house of Jacob for eternity. HBS 68302. $2,950 (Inventory #: 68302)
$2,950.00 add to cart Available from
Heritage Book Shop
Share this item