Report of All Such English Statutes as Existed at the Time of the First Emigration of the People of Maryland, and Which by Experience Have Been Found Applicable to Their Local and Other Circumstances; and of such others as have since been made in England or Great-Britain, and have been introduced, used and practised, by the courts of law or equity; and also all such parts of the same as may be proper to be introduced and incorporated into the body of the statute law of the state. To which are prefixed an introduction and lists of the statutes which had not been found applicable to the circumstances of the people: with full and complete indexes 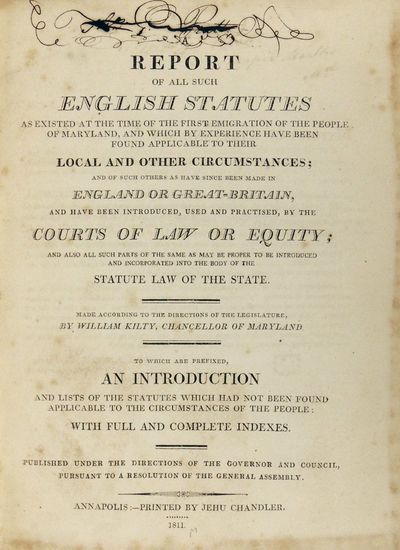 by Kilty, William (Chancellor of Maryland)
Annapolis: Jehu Chandler, 1811. Hardcover. Very Good. Hardcover. Thomas J. Pratt's copy with his ownership signature on three pages. It is crossed out on the top of the title page. Pratt (1804 - 1869) served as both a US senator and the governor of Maryland. He was a Whig but later switched to the Democratic Party after the Whigs were dissolved. This book is also ex-library from Ober, Grimes, and Shriver - National Bank Building in Baltimore with stamp to front free endpaper and evidence of removed signout card to rear pastedown. In a modern binding of beige buckram with black title "Kilty's English Statutes 1811" to spine. Clean overall aside from markings mentioned above, light foxing throughout, and browning to margins on early and late pages. Size: Quarto. 289 pages plus errata. MD/032520. (Inventory #: 33889)
$900.00 add to cart or Buy Direct from
Kelmscott Bookshop
Share this item

Beaverdam, OR : Beaverdam Press , 1981
(click for more details about Printers on Morris)

Tapa. The Bark Paper of Samoa and Tonga

by Bell, Lilian and Ulista Brooks

Tokyo : Bunseido Press / Bell & Brooks , 1979
(click for more details about Tapa. The Bark Paper of Samoa and Tonga)
View all from this seller>