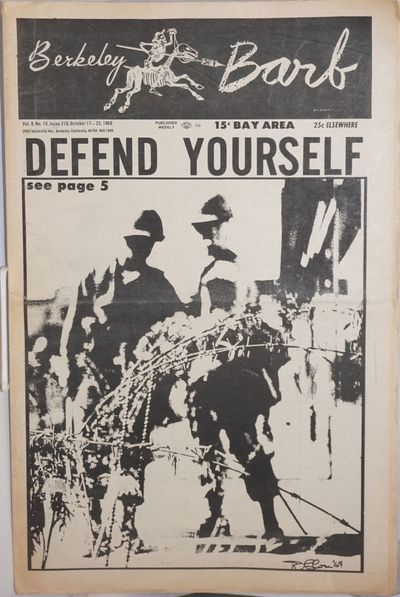 by Coult, Allan, ed
Berkeley: Berkeley Barb, 1969. Newspaper. 20p., folded tabloid, illus., lightly and evenly toned, tiny splits at bottom of spinefold, else very good condition. Another issue from the Allan Coult interregnum, before the return of Max Scherr as owner. Cover features solarized photo of national guard soldiers behind barbed wire, under the headline "Defend Yourself". Inside: article of same title is a non-licensed lawyer's report on the S.F. Public Defender's office, which he deems incapable of actually defending anyone; two full pages of reports on the October 15 Vietnam Moritorium demonstrations held in S.F. and Berkeley (in the rain, no less); a report on the Weather/SDS Days of Rage actions in Chicago; predictions of an upcoming "mass-based" rent strike in Berkeley; the usual smattering of news and ads of the era, including a full-page ad from S.F. porn emporium, Le Salon, that includes listings of both gay and straight books and magazines for sale by mail order, as well as half-page devoted to nude Male Playing Cards for sale. (Inventory #: 248817)
$25.00 add to cart or Buy Direct from Bolerium Books
Share this item