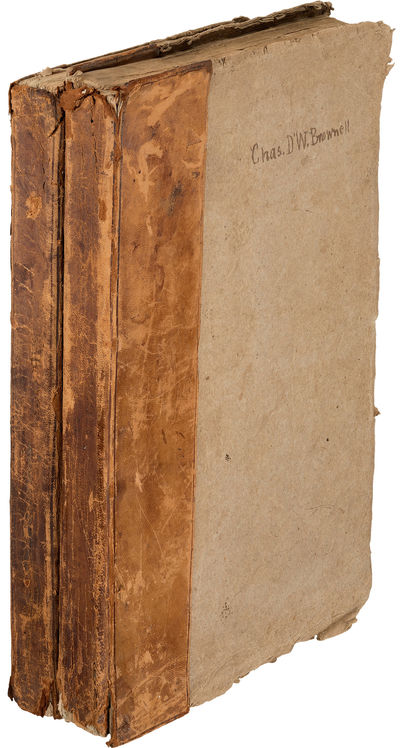 by [CONSTITUTION]
"WE, the People of the United States, in order to form a more perfect union, establish justice, insure domestic tranquility, provide for the common Defence, promote the general welfare, and secure the blessings of liberty to ourselves and our posterity, do ordain and establish this constitution of the United States of America." [CONSTITUTION].
Newspaper. The American Mercury, Two Bound Volumes, published in Hartford, Connecticut, each 10 x 16 in., in original quarter sheepskin and paper boards. Covers inscribed with name of owner*, Charles D'W. Brownell of Bristol, Rhode Island. Vol. IV, No. 169. The first volume contains 99 issues from February 7, 1785 to December 25, 1786, missing seven. The second volume runs from January 1, 1787 to December 29, 1788, likewise missing seven.

Having just been approved by the Constitutional Convention on September 17th, the complete text of the Constitution was published in this paper two weeks later, along with the transmitting documents conveying the Convention's request that it be laid before Congress. The Articles of Association Congress in New York debated for two days, and on September 28, officially sent the Constitution to the states for ratification.

There is extensive coverage of the following topics: Shays' Rebellion, the Northwest Ordinance, debates on the Constitution, and updates on ratification. The inside cover of the second volume has notes and a pastedown summarizing significant events in the ratification process.

There are also two lengthy pieces by Daniel Boone on the Kentucky wars, and two by Dr. Benjamin Rush opposing the death penalty. Smaller pieces concern limiting freedmen's rights in Connecticut, and restricting the sale, trade or ceding of lands held by two Native American tribes in the state of New York. There are the usual assortment of advertisements and legal notices, including posting of rewards for runaway slaves. Very good condition overall.

* Likely Charles DeWolf Brownell of Connecticut. In the early 1850s, an illness led Brownell to give up practicing law for a career as a painter. In 1854, he received an honorary Master of Arts degree from Hartford's Trinity College. In 1860 Brownell established a studio in New York City, where he worked until 1865. He studied and worked throughout Europe until 1871, afterwards returning to the United States and settling in Bristol, Rhode Island. Brownell also traveled and worked in Cuba, Jamaica, Egypt and several other countries, and became one of America's foremost painters of landscapes and seascapes. His most celebrated work is a painting of Connecticut's Charter Oak, which has proved to be an invaluable reference since the tree fell in 1856. He also co-authored and illustrated a well-known work on the history of Native Americans, 1855's The Indian Races of North and South America. (Inventory #: 26054)
$40,000.00 add to cart Available from Seth Kaller
Share this item