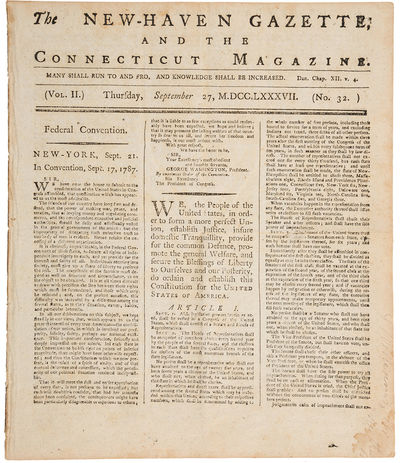 by [CONSTITUTION]
"WE, the People of the United States, in order to form a more perfect union, establish justice, insure domestic tranquility, provide for the common Defence, promote the general welfare, and secure the blessings of liberty to ourselves and our posterity, do ordain and establish this constitution of the United States of America." [CONSTITUTION].
Newspaper. The New-Haven Gazette, and The Connecticut Magazine. September 27, 1787. M.DCC.LXXXVII (No 32.) Printed and Published by Josiah Meigs. Signed in type by George Washington and the other 38 delegates who signed the Constitution. 8 pp. Quarto (8.625 x 10.125 inches). ([249]-256, though what should be page 255 is mis-numbered 247, as is the case with the other copies we have seen of this edition). Accompanied by title and index leaves printed slightly later, for binding after end of year.

Having just been approved by the Constitutional Convention on September 17th, the complete text of the Constitution was published in the New-Haven Gazette
just ten days later, along with the transmitting documents conveying the Convention's request that it be laid before Congress and afterwards submitted to "a convention of Delegates, chosen in each state by the People thereof..." Resolved that if nine States ratify, electors should be chosen for a presidential election, and that the machinery of the new government be set in place.

The Articles of Association Congress in New York debated for two days, and a day after this printing, officially sent the Constitution to the states for ratification. State ratification conventions would soon pit Federalist against Anti-Federalist in impassioned debates over the implications of the Constitution and its extension of national government power and influence.

This is the earliest available Connecticut printing of the Constitution. The Connecticut Journal printed it one day earlier, but we can find no copies in market sales records of the last 30 years.

The text of the Constitution is preceded here by George Washington's letter to Congress and followed by the Resolution for ratification. Evans 20563; Lomazow 18b.

Gathering of four leaves, paginated [249]-252, and two loose leaves. Mild yellowing, with a hint of discoloration and spot or two of foxing; soft crease each vertically and horizontally bisecting all leaves; small handful of faint dampstains at margins of first and final leaf; barely perceptible inked signature at lower corner of recto of first leaf; hint of residue, discoloration along center fold where newspaper was removed from bound volume.

Title and index leaves softly browned and a bit brittle, with edges roughened where removed from bound volume; both bisected by soft horizontal crease; faint staining to leaves, particularly recto of title; some mild chipping to edges of title-leaf, particularly fore-edge, with fold starting to split at either end, about two inches in from either direction; previous owner inking at recto of both leaves; corners of index leaf creased.