A Statement of the Claims of Charles T. Jackson, M.D. to the discovery of the applicability of sulphuric ether to the prevention of pain in surgical operations. 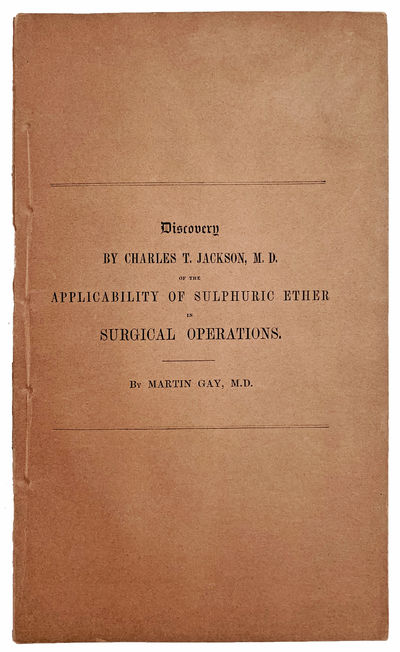 by GAY, Martin (1803-1850).
Boston:: Printed by David Clapp, 1847., 1847. 8vo. 29, [3], xviii pp. Original brown printed wrappers. Near fine. This is the one and only publication of Martin Gay, though he was learned and lectured widely. Publishing his papers was not something he did more than this once. “He published nothing in his own name except a pamphlet, in the year 1847, entitled, “Discovery, by Charles T. Jackson, M.D., of the Applicability of Sulphuric Ether in Surgical Operations.” Whatever difference of opinions may exist as to the question at issue in the controversy respecting the discovery of Etherization, there can be none as to the ability, fairness, and gentlemanly spirit with which that production is written, nor the generous devotion of friendship which prompted him to undertake the defense of what he believed, with the strongest conviction, to use his language, to be ‘the cause of truth and justice.’” [Obituary]. Littell's Living Age, edited by Eliakim Littell, Robert S. Littell. vol. XXIV, Jan-Feb-March 1850. p. 462. / Martin Gay, M.D., educated at Harvard University, taking his medical degree in 1826. He was considered expert in chemistry and mineralogy. “His judgment was sound and discriminating, and he was skillful in the application of his knowledge to practical purposes. … In many of the analytical processes of [chemistry], especially those required in toxicological researches, he was thoroughly versed; and his scientific services were sought in many cases of suspected poisoning.” He was one of the founding members of the Boston Society of Natural History and a Member of the American Academy of Arts and Sciences. REFERENCE: Fulton & Stanton, The Centennial of Surgical Anesthesia, (1946), V, 8 (pp. 71). [241-20]. (Inventory #: M13946)
$400.00 add to cart Available from
Jeff Weber Rare Books
Share this item