Cindie: A Chronicle of the Canefields 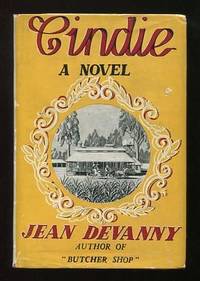 by Devanny, Jean
London: Robert Hale Limited. Very Good+ in Very Good dj. 1949. First Edition. Hardcover. [nice tight copy, lightly shelfworn, some dust-soiled to top of text block; jacket shows just a bit of edgeworn, minor soiling (mostly to rear panel)]. The final published novel by this New Zealand-born writer (1894-1962), who was well-known for her outspoken opinions on sexuality and women's rights. Set in Northern Australia in the 1890s, it tells the story of a maid who rises in life through her "drive, initiative and energy" to become manager of a sugar plantation. In addition to being a penetrating character study, the book also "provides a brilliant and fascinating picture of the life of the early Australian settlers, the political background of those pioneering days, and a sympathetic insight into the complicated social problems arising from differences in class and colour." Devanny's first novel, "The Butcher Shop," had been banned in New Zealand, Australia, Germany and parts of the U.S.; in 1929 she moved with her family to Australia, where she was deeply involved with the Communist Party until she was expelled in 1941, ostensibly for "moral degeneracy." She later lamented that her devotion to the Party and its causes had prevented her from realizing her full potential as a writer, but she did manage to turn out over a dozen novels plus a smattering of non-fiction works. . (Inventory #: 23838)
$200.00 add to cart Available from ReadInk
Share this item
ReadInk
Offered by

Force of Evil: The Critical Edition

by Polonsky, Abraham (ed. by John Schultheiss and Mark Schaubert)

Northridge CA : The Center for Telecommunication Studies/California State University , 1996
(click for more details about Force of Evil: The Critical Edition)
View all from this seller>