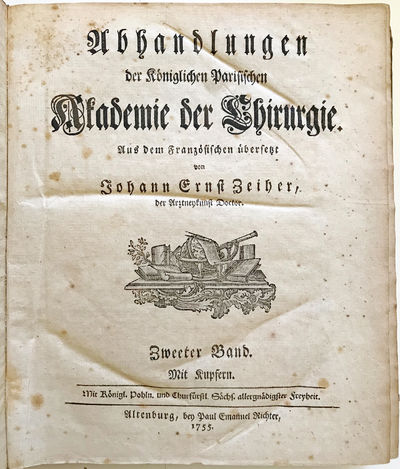 by [Academie Royal de Chirurgie].
Altenberg:: Paul Emanuel Richter, 1755-60., 1755. Small 4to. 2 volumes [vols. 2 & 3 of 5]. a4, a-l4, m2, A-3Y4, 3Z2; [*]4, a-s, A-4P4, 4Q2. Pagination: [8], LXXXXII, 548; [VIII], 144, 672, [4] pp. Black letter. Vol. 2 contains 22 engraved folding plates [Bound correctly, but numbered out of sequence, thus starting with plate II, but plate I appears later, plates XIX and XX correctly placed, but again out of sequence.]; vol. 3: with 19 engraved folding plates, list of plates, errata, index. Original paper boards, manuscript titles on spine; corners bumped, foxing, light toning, dampstains on covers and pages. First German edition, translated from the French. The essays are written by some of the leading members of the French Academie in the mid eighteenth century. "Two steps more put the surgeons on a social and scientific level with the doctors, viz. the foundation of the Academy of Surgery, the first session of which was held on December 18, 1731; and the ordinance of Louis XV (1743), delivering the surgeons from further association with barbers and wig-makers, who were forbidden to practice, while no one could be a master in surgery thereafter without being a master of the arts.. . . The King was inspired to make this wise move by Francois de la Peyronie (1678-1747) the eminent Montpellier surgeon who, with Georges Mareschal (1658-1736) had founded the Academy of Surgery and, in fact, devoted his entire fortune to the advancement of his beloved art." – Garrison. The prefatory history of the French Royal Academy of Surgery is a valuable resource (in 2 parts: pages I-LXXXXII; 1-144), "Historie der Koniglichen Akademie der Chirurgie" begins with the 1731 founding of the society, and carries it through (in volume III) to 1757. The French original "Memoirs" were begun in 1743. In all there are 71 medical papers translated from French to German. In the original Ash lists four Garrison and Morton papers (Virgil 3248, Francois de la La Peyronie 4163, Jacques Daviel 5829, Henri Francois Le Dran 2607). Jean L. Petit's paper on ulcers of the liver appears on p. 54. Other contributors include Verdier, Morand, Benomont, Talin, Recolin, R.J.C. de Garengeot (amputation of the leg), Belloq, Louis, Thranensistel, de la Fouse, Guerin, Lafette, la Faye, Veyretm Boucher, Simon, Suret (a belt device for exomphalos during pregnancy), Daviel, Coutavos, Hoyn, Bordenave, Foubert, Guiot, Le Dran, Mareschal, Moreau, Bertrandi, H. Houstet on swelling of the bones [Abhandlung von den Geschwulsten der walzenformigen Knochen], Recolin, Levret, Hevin, Guattani, Sabatier, Pipelet, Pibrac, Duphenir, Moscati, Foubert, Andouille, Civadier, Vercher and often there are multiple papers by these persons. REFERENCES: Waller 7196 (vols. 1 & 2 only). OCLC: 183354013 (1 copy). Not in Blake/NLM, Wellcome. RLIN, KVK. (Inventory #: MM12975)
$235.00 add to cart Available from
Jeff Weber Rare Books
Share this item