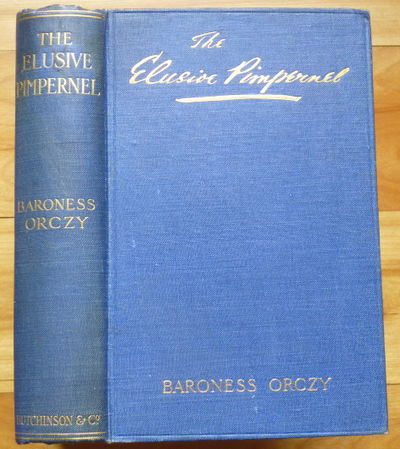 by Orczy, Baroness ["Emmuska"]
1908. London: Hutchinson & Co., 1908. 32 pp ads dated Autumn 1908. Original blue cloth. First Edition of "these further exciting incidents in the life of the Scarlet Pimpernel during the French Revolution after the King's death" -- the sequel to Baroness Orczy's THE SCARLET PIMPERNEL (play 1903, novel 1905) and I WILL REPAY (1906). Although this was the third book (of eighteen) published in this Reign-of-Terror series featuring Sir Percy Blakeney aka The Scarlet Pimpernel, it is the seventh in plot chronology. THE ELUSIVE PIMPERNEL has been adapted for the screen at least three times -- in 1919, in 1950 (as "The Fighting Pimpernel"), and in 1969. None of these is to be confused with Daffy Duck's memorable 1954 short titled "The Scarlet Pumpernickel." An oddity of this book is that in its own ad catalogue it is listed as THE ILLUSIVE PIMPERNEL. This is the Michael Sadleir copy, with his small oval bookplate on the front free endpaper; it is in fine condition (all-but-inevitable foxing on the edges of the leaves, owner's 1908 signature). (Inventory #: 14518)
$575.00 add to cart or Buy Direct from
Sumner & Stillman
Share this item

THE SCARLET LETTER. A Romance

1850
(click for more details about THE SCARLET LETTER. A Romance)

THE MYSTERY OF EDWIN DROOD