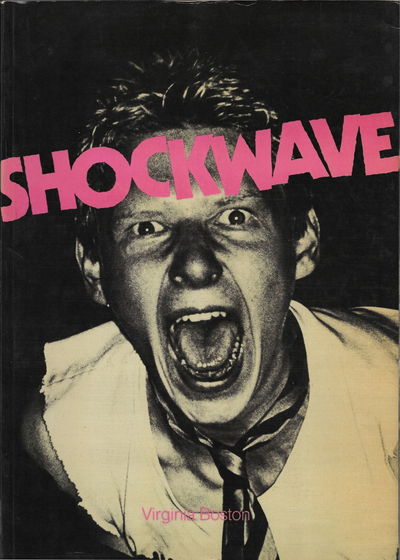 by Boston, Virginia; Danny Bake and Ian Rakoff, intros.
Glossy wraps, 20.9 by 29.5 cm, 128 pp., heavily illus. in black and white. Light wear along the top edge, faint creases at the upper corner, and sun fading along the spine. An early and surprisingly scarce photojournal of first-gen punks. From the back cover: "1977 saw a rock revolution. Out of a future with few opportunities, British youth created a movement which came to be known as Punk Rock. Virginia Boston has, through an extraordinary collection of over 200 photographs, followed punk from its beginnings in 1976 through the eyes of the punks themselves, through their own fanzines [with images of, and brief quotes about Rotten to the Core, Viva la Resistance, London's Burning, Live Wire, Shews, Skum,
48 Thrills, More On, White Stuff, and Garage Land], the lyrics of their songs, through interviews and quotes from the Sex Pistols, the Clash, the Stranglers, the Damned, the Jam, Chelsea, Generation X, the Buzzcocks, X-Ray Specks [sic], the Slits, and lots more. She has traced the movement through sensationalist press and TV reports and especially through the fluctuating career of the Sex Pistols – who gave punk its original energy – and its notoriety. Punk has its own music, magazines, dress, attitudes, clubs and record labels. They are all in Shockwave, along with the kids who started it at street level and fought on to keep the motivation behind the new wave for change – any change." Includes a ten-page section on the Roxy Club. Amazing photographs, including shots by Sheila Rock, Bob Gruen, and Pete of Shews. (Inventory #: 3402)
$200.00 add to cart Available from Bay Leaf Books
Share this item

Black Belt Woman: The Magazine of Women in the Martial Arts and Self Defense, Complete Run of Six Issues, September 1975 – July/August 1976

by DeMarco, Michael A.