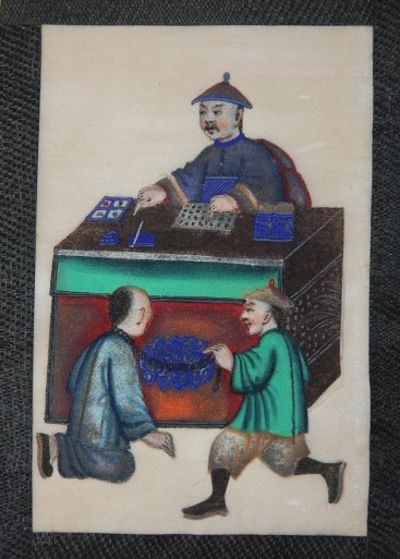 Cloth
Cloth. Very Good. 16.5 by 12 cm. Each of the watercolors is framed by mounted cloth strips, as opposed to the more usual paper strips. Ten of the scenes depict various Chinese tortures. One of the other watercolors shows a man sitting at a counter with cards, and two smaller people kneeling in front of his counter. This picture we think is probably depicting gambling. The other watercolor not about punishment is a rendering of a peasant balancing a yoke or carrying pole. The album was surely made for a Western tourist or temporary resident, and the scenes of torture were a popular subject, as well as playing into stereotypes about the Chinese. While the pith paper here has a few cracks and holes, as very typical, these specimens are most definitely better preserved than most such albums. The watercolors are simple, as also the norm for smaller, souvenir albums. That said, the gambling, or card playing scene, offers more interest and is artistically just a bit more sophisticated than average for the genre. The cloth cover is partially sunned front and back -- it is obvious that the album was sandwiched between other books for a long period of time. There is fraying of the cloth along the joints. (Inventory #: 006465)
$650.00 add to cart Available from
White Fox Rare Books & Antiques
Share this item
White Fox Rare Books and Antiques
Offered by