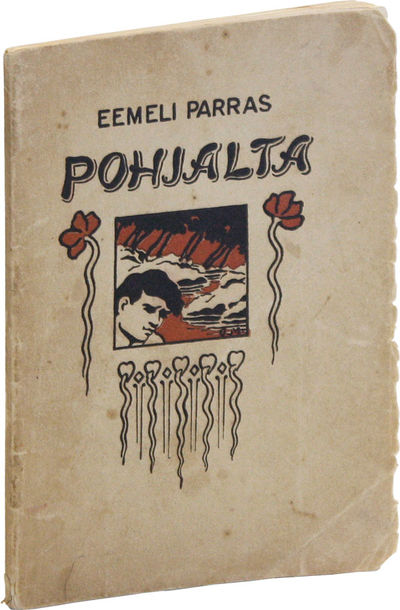 by [FINNISH-AMERICANS] PARRAS, Eemeli
[Fitchburg, MA: Raivaajan Kirjapainossa ja Kunstannuksella, 1910]. First Edition. Paperback. The author's first book, a collection of socialist poetry published by the Finnish-language socialist paper "Raivaajan." Eemeli Parras (1884-1939) emigrated from Finland to Canada in the first years of the 20th century, joining the short-lived Finnish commune Sointula on Malcolm Island in British Columbia, though the community disbanded in 1905 after which he went to work in a copper mine and as a journalist for several Finnish-language socialist papers in the United States. His writing "was probably the first of the Finnish language to be associated with the canon of socialist realism," and his oeuvre included not only poetry, but also fiction and drama (see Alexey Golubev and Irina Takal, "The Search for a Socialist El Dorado" (2014)). This work exceedingly scarce, OCLC locating two copies as of March, 2020, at U. Minnesota and the National Library of Finland. Slim 12mo (18.5cm.); publisher's tan pictorial card wrappers; 64pp. Wrappers a bit worn and soiled from handling, brief foxing to early leaves, else Very Good and sound. (Inventory #: 47868)
$150.00 add to cart or Buy Direct from
Lorne Bair Rare Books
Share this item

Report of an Examination of Poor-Houses, Jails, &c. in the State of New York, and in the Counties of Berkshire, Massachusetts; Litchfield, Connecticut; and Bennington, Vermon, &c. Addressed to Aristarchus Champion, Esq., of Rochester, N.Y. [Third Edition]

Albany : New York State Temperance Society , 1835
(click for more details about Report of an Examination of Poor-Houses, Jails, &c. in the State of New York, and in the Counties of Berkshire, Massachusetts; Litchfield, Connecticut; and Bennington, Vermon, &c. Addressed to Aristarchus Champion, Esq., of Rochester, N.Y. [Third Edition])

Cloud Castle and Other Papers. With a Foreword by W.H. Hudson

London : Duckworth , 1922
(click for more details about Cloud Castle and Other Papers. With a Foreword by W.H. Hudson)
View all from this seller>