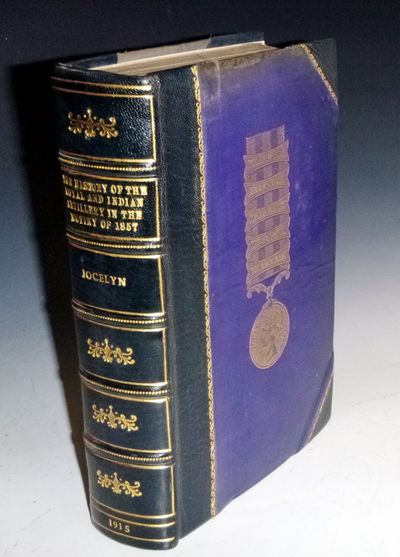 by Jocelyn, Julian R J.
London: John Murray, 1915. First Edition. Large Octavo. xxv, 520 pages, folding maps. This history of the Royal Artillery and the Indian Mutiny was issued as the Great War, was in its second year. The unit worked with the Bengal, Madras and Bombay artillery during the campaign, its four regiments were officially combined soon afterwards in 1861. This work is effectively a military history of the Indian Mutiny itself, its covers events chronologically from minor skirmishes to the sieges of Delhi and Lucknow. The narrative is based both on official dispatches and on books, diaries, letters and interviews with eye-witnesses of the events it relates and is illustrated with drawings and sketch maps. Bound in a modern 3/4 black morocco over the original royal blue gilt stamped cloth, raised bands, compartments lettered and decorated in gitl, some marginal scattered foxing, top edge gilt, endpapers renewed. A very good copy. (Inventory #: 027690)
$350.00 add to cart or Buy Direct from
ALCUIN BOOKS, ABAA
Share this item