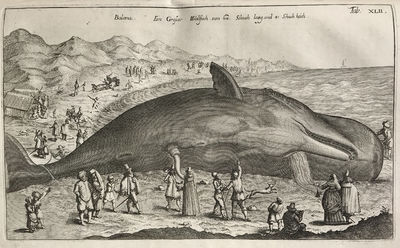 by JONSTON, John [or Johnstone or Joannes JONSTONUS, or JONSTONI, Johannes] (1603-1675).
Heilbronn:: Franciscus Josephus Eckebrecht, 1767., 1767. Tall 4to. (335 x 211 mm) 228, [4] pp. 47 plates; text with some foxing. Original paper over boards. Housed in a custom clamshell box. Rare. FINE. An extensive work on the morphology of boned fish, cartilaginous fish (sharks, rays, skates) and cetaceans. This work is illustrated with forty-seven full-page engraved plates that are executed in superb form. Plate XLII shows a beached baleen whale and its enormous size, compared to the men in the engraving. A bit fanciful, plate XL shows a pair of Mermen; a fish on plate XXVII has the features of a human face whilst a 'shark' on plate VII has semi-human fore-limbs. Except for these anomalies, the zoological drawings are quite dramatic and relatively accurate. Jonston's works were frequently re-edited and translated into German, Latin, Dutch and English. Born in Poland, but of Scottish origin, Jonston was educated and traveled extensively. He attended St. Andrews (1623-5), studying botany and medicine at Cambridge, Leiden, and Frankfurt Universities. He earned degrees from Cambridge and in Leiden, his M. D. in 1632, where he later practiced medicine and gained a great reputation. In 1642 he briefly taught at Frankfurt as professor of medicine. He retired to his private estate in Silesia in 1655. His "four dictionary-style works on fish, birds, quadrupeds and insects -- published between 1650 and 1653 with excellent illustrations -- were widely read and translated." [DSB]. BM Readex Vol. 13, p. 765; DNB Vol. X, pp. 968-9; DSB Vol. VII, [p. 164-5; Nissen 2133. See Garrison and Morton 287. (Inventory #: S13771)
$2,350.00 add to cart Available from
Jeff Weber Rare Books
Share this item