A GUIDE TO THE CITY OF CHICAGO: ITS PUBLIC BUILDINGS, PLACES OF AMUSEMENT, COMMERCIAL, BENEVOLENT, AND RELIGIOUS INSTITUTIONS; CHURCHES, HOTELS, RAILROADS, ETC., ETC. 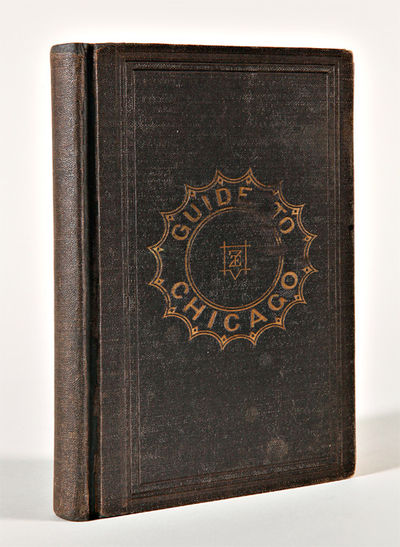 by [Chicago]
Chicago: T. Ellwood Zell & Co., 1868. 197pp. (pastedowns are paginated), plus folding map and [26] leaves of plates. 12mo. Publisher's brown cloth, title in gilt on front board and in blind on rear board, expertly rebacked, retaining original backstrip. Ownership inscriptions on front pastedown and p.5. two very small closed tears in edges of the map. Very good. An important guidebook to Chicago before the Great Fire of 1871, featuring views of many buildings that were soon to be destroyed. Included are panoramas of Chicago in 1830 and then in 1868, as well as images of the (Old) University of Chicago, Crosby's Opera House, the Court House, Chamber of Commerce, Orphan Asylum, Tremont House, the depot of the Michigan Southern and Rock Island railroad line, and the Water Works (the water tower survived the fire). Advertisements are abundant and are interspersed throughout, weaving seamlessly in and out of indexes to Chicago businesses, banks, churches, tourist attractions, and newspapers. This is the first time we have handled this title; it is relatively uncommon on the market and at auction. HOWES C368. SABIN 12655. GRAFF 1687A. ANTE-FIRE IMPRINTS 1303. (Inventory #: WRCAM54854)
$2,000.00 add to cart or Buy Direct from
William Reese Co. - Americana
Share this item

[ANNOTATED VERNACULAR PHOTOGRAPH ALBUM RECORDING THE SCHOOL-AGE LIFE OF A YOUNG JAPANESE-AMERICAN WOMAN IN CALIFORNIA IN THE LATE 1930s, AND INTO THE WORLD WAR II AND INTERNMENT PERIOD]

[Various locations in California, including Portersville, Terra Bella, Three Rivers, Delano, Lomita, and others 1943
(click for more details about [ANNOTATED VERNACULAR PHOTOGRAPH ALBUM RECORDING THE SCHOOL-AGE LIFE OF A YOUNG JAPANESE-AMERICAN WOMAN IN CALIFORNIA IN THE LATE 1930s, AND INTO THE WORLD WAR II AND INTERNMENT PERIOD])

Laramie City : Daily Sentinel Print , 1875
(click for more details about HISTORY AND DIRECTORY OF LARAMIE CITY, WYOMING TERRITORY, COMPRISING A BRIEF HISTORY OF LARAMIE CITY FROM ITS FIRST SETTLEMENT TO THE PRESENT TIME, TOGETHER WITH SKETCHES AND CHARACTERISTICS OF THE SURROUNDING COUNTRY...)
View all from this seller>