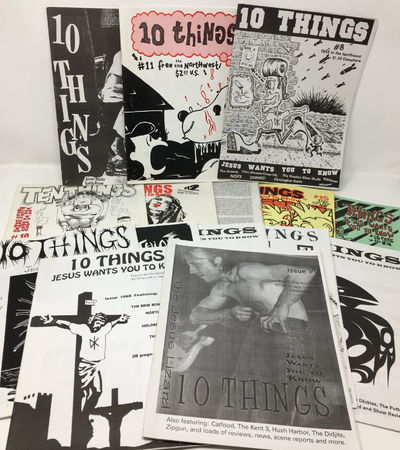 by Halligan, Dan; David Parker, editors; Amy Stillman, et al.
Issues 1 through 12 (1991-1995), an issue missing its cover (either no. 13 or 14), and issues 15 (1996) and 16 (1997). Issues 1 and 2 are Xeroxed recto-only and stapled on the upper left corners, the remaining issues are staple-bound wraps, offset-printed, with spot-colors on the covers starting with issue 10, approx. 21.5 by 28 cm, 20-64 pp. ea., illus. Overall very good with light wear to the corners and wraps, with the following defects: issue 11 has some drip stains on the back cover and the last few leaves, and dampstains to the lower corner; issue 12 has a couple of tiny stains on the front cover; and, as mentioned, one issue is lacking its cover and has some light dampstains along the spine. More than a fanzine, this is a full-blown magazine dedicated, though not limited to the Northwest punk scene – especially Seattle. The mag's title is a joke, and the editors are quite anti-religious. A massive amount of content, including interviews with, and show and album reviews on, Mudhoney, naked Aggression, Gargoyles, Nirvana, Bitch!, Sicko, Officer Down, DC Beggars, Haggis, Down by Lay, Sick & Wrong, The Gits, Crunt, Pain Teens, Quincy Punx, Jawbox, The Dickies, North American Bison, 7 Year Bitch, The New Bomb Turks, The Jesus Lizard, Voodoo Glow Skulls, Chaos UK, Killdozer, NOFX, Unsane, Fitz of Depression, Los Crudos (from Chicago), The Queers, Slugs, The Dancing French Liberals of '48, Melvins, CopShootCop, The Cows, The Fallouts, Laughing Hyenas, The Drags, The Lunachicks, The Vandals, Mr. T Experience, Teengenerate, The Bouncing Souls, The Bloodclots, The Cheater Slicks, Spider Babies, and many, MANY more. Articles and columns include Riot Grrrl (and an article on Riot Boy), zine reviews, reader letters, local punk news and gossip, an "Ex-Yugoslavia Scene Report," movie reviews, "Industreality" (they're industrial column, later called "Industry Standards"), Washington state's anti-gay initiatives, "Punk Ponderings," scene reports from around the country and world, lots of political commentary, skating (I mean, Sk8ing), vegan cooking, tattoos and piercing, the "Ask Wandi" fashion column, Straight Edge, cartoons, Critical Mass, a sex column, and a little fiction. Issue 16 of 10 Things includes "The 10 Things Northwest Punk Compilation" CD (near fine with original tracklist) with 33 songs by Bristle, The Fumes, Whipped, Screwjack, Haggis, Not My Son, Whorehouse of Representatives, Poppa Wheelie, John Q. Fascist, The Degenerates, Sissies, and many more. "Pure punk to save your soul." (Inventory #: 3432)
$225.00 add to cart Available from Bay Leaf Books
Share this item