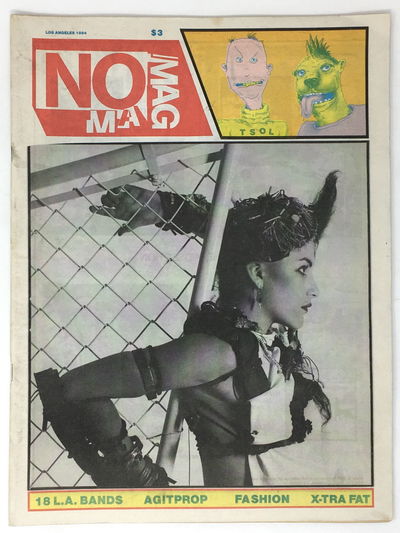 by Kalberg, Bruce, ed., pub.
Issue 13. Newsprint tabloid, 28 by 37 cm, [40] pp incld. wraps, primarily black and white with some color. Very good with light corner creases; minor yellowing throughout. Interviews with The Modifiers, designer Janette Swift, Tupelo Chain Sex, The Cambridge Apostles, Ruben Blue from Scratch Magazine, T.S.O.L., Superheroines, Pinkietessa Braithwaite, John Doe of X, Animal Dance, The D.I.'s, The Odd Squad, Fiends, KommunityFK, actor Chris Pederson from Suburbia, Wayzata, Kid Congo Powers of The Gun Club, The Hollywood Hillbillies, Tito Larriva of the Cruzados, Lions and Ghosts, and PSIcom. Art by Lindsey Loch, Deborah Valentine, Bruce Kalberg, full-page art by Lyn Mayer and Peter Chung, and a full-page, color agitprop poster—"We Are All Prisoners"—by Andrew Maben. Plenty of fashion photography, cartoons, and great adverts.
No Mag was published by Bruce Kalberg in 14 issues between 1978 and 1985,1 first as No magazine, then No Mag. It was known for its coverage of punk bands, outlandish fashion shoots, and sexual imagery—at times violent and extreme. "It's an edgier magazine," said Christopher Bickel of Dangerous Minds, "and, in many ways because of the artistic focus, seems more timeless than its contemporaries, dated only by its political incorrectness and non-digital layouts. The sometimes-transgressive art and photography, along with the interviews of now-legendary bands, make this [zine] a crucial historical resource."2
Paul Cullum of LA Weekly expands on the mag's history, "Bruce Kalberg started No Mag in 1978 with Michael Gira, a friend from Otis College of Art and Design, who left for New York after several issues to form the early noise band the Swans. Aside from the requisite profiles of X, Fear, the Germs, Johanna Went, Phranc, Suicidal Tendencies, ad gloriam, this sub-Slash tabloid fanzine amply captured the corrosive admixture of medical atrocities, sexual pathology, gallows humor and political anarchy endemic to the times: autopsy photos; profiles of working dominatrixes; textbook entries on female circumcision and how to synthesize heroin from morphine; cartoons of 'Nancy Reagan's favorite color' (bloody Tampaxes); and house ads featuring photos of progressive gum disease, with the caption, 'You liked our smile, now catch our disease' — what Kalberg once called 'the old cliché of shit-and-guts imagery' by which to wage war on polite society. It also frequently bordered on the pornographic — Susanna Hoffs topless, Belinda Carlisle naked under tights, Germs producer Geza X with his cock in his hand, the Cramps' Brian Gregory with a semi-erection and a python, and the irrepressible El Duce shitting on a plate are a fair representation — forcing him to manufacture it in San Francisco, where printers are apparently more tolerant. 'We wanted to make the most evil, nihilistic magazine ever,' he says in a 2007 profile in the ANPQuarterly by co-editor Aaron Rose. Kalberg is widely remembered for shaving a reverse Mohawk into his head and covering it with liver, a look he wore out to the clubs and later re-created for a full-page ad in Slash — garnering him the nickname Liverhead. 'He was a really strange guy,' [Exene] Cervenka [of X] says, 'but once you got to know him, he fit in with all the other weirdos, if you can imagine that becoming normal, him walking around like that.'"3 (Inventory #: 3440)
$50.00 add to cart Available from Bay Leaf Books
Share this item

The Story of Eloptic Energy: The Autobiography of an Advanced Scientist

Washington DC : Foundation of the American Institute for Conversation of Historic and Artistic Works , 1979
(click for more details about Japanese Scroll Paintings: A Handbook of Mounting Techniques)
View all from this seller>