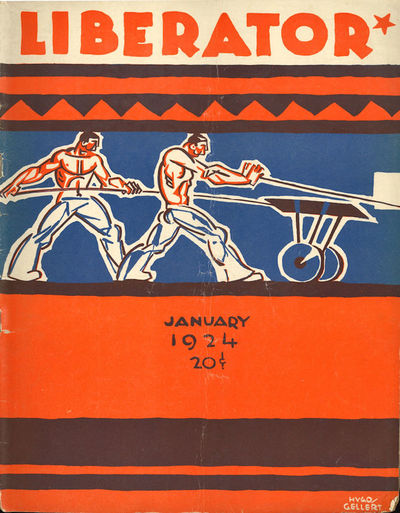 by Liberator
New York: Published by Liberator Publishing Co, 1924. VII:1. (Whole number 69). Quarto. Pictorial wrapper by Hugo Gellert. Illustrations. Uniform tanning and fragility to textblock, old vertical crease, spine largely split, creased chip at blank fore- edge of a few leaves, lower wrapper dust- soiled, creased tear in centerfold from spine. A fair to near good copy. Edited initially by Max and Crystal Eastman and Floyd Dell, and further on by Robert Minor, et al, with distinguished art and advisory editors. This number includes contributions by Dell, Art Young, et al Published monthly from March 1918 through October 1924, LIBERATOR was the direct successor to THE MASSES, maintained in much the same spirit, but with a sharpening of concerns based on refinements in Marxist principles and practice, most notably in light of developments in Russia. GOLDWATER 137. HOFFMAN, et al, p.254. (Inventory #: WRCLIT83417)
$50.00 add to cart or Buy Direct from
William Reese Co. - Literature
Share this item

Garden City : Doubleday, Page & Company , 1919
(click for more details about THE SCHOLARS)
View all from this seller>