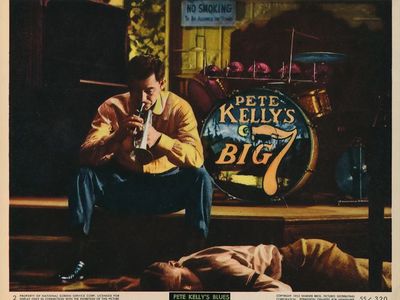 by [Jazz Film]: Breen, Richard L. [screenwriter]
[Los Angeles]: Warner Bros, 1955. Twelve full color 8 x 10" glossy color stills, with cut-lines. Slightly curled, with some minoir darkening to the borders. but very good. A set (1-12) of the color stills used in promoting the film, based on Richard L. Breen's screenplay. Directed by and starring Jack Webb as Pete Kelly, a Kansas City trumpter and band leader, along with Janet Leigh, Edmond O'Brien, Peggy Lee (a role for which she was nominated for an Oscar), Lee Marvin, and Ella Fitzgerald, et al. The soundtrack was nominated for a Grammy. (Inventory #: WRCLIT83426)
$65.00 add to cart or Buy Direct from
William Reese Co. - Literature
Share this item