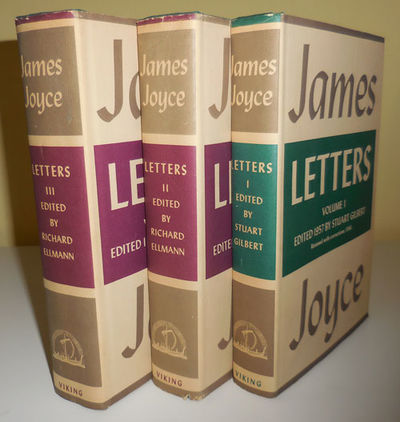 by Joyce, James (Edited by Stuart Gilbert and Richard Ellmann)
New York: Viking Press, 1966. Mixed Edition. Hardcover. Near Fine/very good +. Three uniform green clothbound books in dustwrapper. The letters of Joyce. Volume I is a re-issue with corrections from the 1957 edition which was edited by Stuart Gilbert. Volumes II and II are first editions are are both edited by Richard Ellmann. Handsome near fine to fine copies in very lightly used dustwrappers. No slipcase with this set. (Inventory #: 29043)
$150.00 add to cart or Buy Direct from Derringer Books
Share this item
Derringer Books
Offered by

Santa Barbara : Capricorn Press , 1972
(click for more details about Who Is She That Looketh Forth As The Morning (Signed Limited Edtion))

The Book of During (Inscribed Association Copy)

Great Barrington : The Figures , 1991
(click for more details about The Book of During (Inscribed Association Copy))
View all from this seller>