Fragments on the Theory and Practice of Landscape Gardening. Including some remarks on Grecian and Gothic architecture, collected from various manuscripts, in the possession of the different noblemen and gentlemen, for whose use they were originally written; the whole tending to establish fixed principles in the respective arts. By H. Repton, Esq. assisted by his son, J. Adey Repton 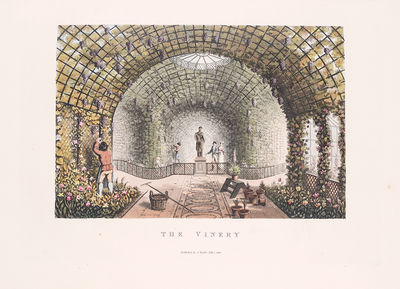 by REPTON, Humphry (1752-1818) & John Adey REPTON (1775-1860)
London: Printed by T. Bensley and Son for J. Taylor, 1816. Large quarto. 42 aquatint plates (22 hand-coloured, including ten with overslips and three double-page, 13 uncoloured, including three with overslips, 7 tinted, including one with an overslip), 1 wood-engraved and letterpress plan, 9 aquatint head- and tail-piece vignettes (including two with overslips), and numerous wood-engraved illustrations. Half-title. Contemporary diced russia, covers bordered in gilt and blind, expertly rebacked retaining the original spine, spine gilt with wide semi-raised bands in five compartments, marbled endpapers and edges. The first edition of Repton's last great work on landscape gardening. Humphry Repton was the main successor to Lancelot "Capability" Brown as an improver of grounds for the English gentry in the late eighteenth and early nineteenth century. He was particularly noted for his Red Books. These were produced for each individual client and were made up from a manuscript description of his proposed improvements bound with Repton's own watercolour drawings of the grounds, with his proposed alterations displayed on an overlay. Repton's landscapes displayed his preference for a gradual transition between house and grounds by means of terraces, balustrades and steps. In both the present work and his earlier Observations. (London: 1803), Repton strives to put across his view that the landscape architect should be guided by the single guiding principle that his work should produce a "pleasing combination of Art and Nature adapted to the use of Man" (preface, p.viii). Repton differentiates between the present work and his earlier Observations (London: 1803) in the preface: "The contents of the present Volume ... will be found neither to be a continuation nor a contradiction of the former Observations; but, from the subject's being elucidated by new and more beautiful examples, the Author's former principles in the Theory and Practice of Landscape Gardening will be confirmed." He goes on to note that the text is drawn from "more than four hundred Reports in MS." i.e his Red Books; this fact alone makes the present work particularly valuable, as many of these Red Books are no longer extant. Abbey Scenery 391; Martin Hardie, p. 129; Prideaux, p. 349; Tooley 398. (Inventory #: 38467)
$17,000.00 add to cart or Buy Direct from
Donald A. Heald Rare Books
Share this item
Donald A. Heald Rare Books
Offered by