The Official Catalogue of the Cotton States and International Exposition Atlanta, Georgia, U.S.A. September 18 to December 31, 1895 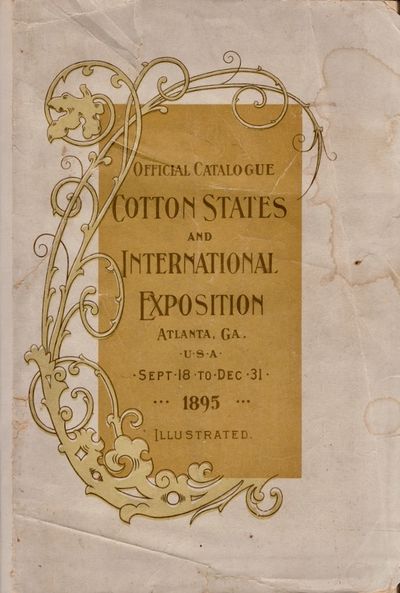 by [Atlanta Cotton States International Exposition]
Atlanta: Clafin & Mellichamp, Publishers, 1895. First Edition. Wraps. Fair. Wraps. 266 pages, 20 pages advertisements. Illustrated front cover with title. Frontispiece photograph of C. A. Collier, President and General Director of the Exposition. Frontispiece folding plan of "Piedmont Park 189 acres". Illustrated folding panorama titled "Official Bird's Eye View Cotton States and International Exposition" located in back. Restored. Front cover, which has some creases, tears and light damp stains, was repaired on the verso. The frontispiece folding plan of Piedmont Park and the folding panorama inside the back cover are repaired on the verso. A couple of pages have light closed edge tears. A new spine and back cover were made. The remains of the original spine title was pasted down on the new paper spine. Catalogue illustrated with photographs, plans, and illustrations. A list of contents, illustrations, and advertisers located on page 266. Text and illustrations are clean and in good condition. Scarce. 21 copies located in OCLC. No other copies online as of 4/20. The 1895 Cotton States and International Exposition was held at the current Piedmont Park in Atlanta, Georgia, United States. Nearly 800,000 visitors attended the event. The exposition was designed to promote the American South to the world and showcase products and new technologies, as well as to encourage trade with Latin America. The Cotton States and International Exposition featured exhibits from several states including various innovations in agriculture and technology. President Grover Cleveland presided over the opening of the exposition. The event is best remembered for the "Atlanta compromise" speech given by Booker T. Washington on September 18, promoting racial cooperation. (Inventory #: 19019)
$300.00 add to cart or Buy Direct from Americana Books
Share this item

Women's Rooms: Art from the collection of the Museum of Finnish Art Ateneum from 1840 to 1950

Helsinki : Finnish National Gallery, Ateneum , 1997
(click for more details about Women's Rooms: Art from the collection of the Museum of Finnish Art Ateneum from 1840 to 1950)

The Art Dealers: Powers Behind the Scene Tell How the Art World Really Works

New York : Clarkson N. Potter , 1984
(click for more details about The Art Dealers: Powers Behind the Scene Tell How the Art World Really Works)
View all from this seller>