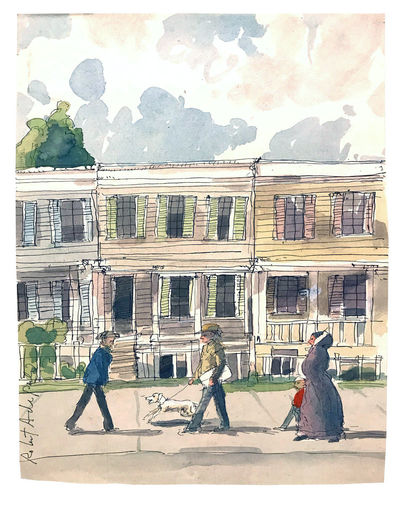 by [Whitman, Walt]; Parker, Robert Andrew
West Cornwall, Connecticut, no date. Original artwork by American painter Robert Andrew Parker, depicting the wooden frame house at 99 Ryerson Street in Brooklyn, a few blocks from the Navy Yard, where Walt Whitman lived from May 1855 to May 1856. Whitman finished the first draft of Leaves of Grass in a second-floor bedroom, and printed the book in Brooklyn Heights in the summer of 1855; that December, Ralph Waldo Emerson visited the Ryerson house to congratulate Whitman on his groundbreaking literary debut. The Ryerson house is the only one of Whitman's New York City residences to survive into the twenty-first century; it remains, surprisingly, unlandmarked. A third story was added at some point, and the whole structure clad in vinyl siding; the Brooklyn-Queens Expressway now rumbles overhead at the end of the block. Parker's watercolor depicts the house as it would have appeared in Whitman's day. Painter Robert Andrew Parker's work is held by the Metropolitan Museum of Art, the Museum of Modern Art, the Whitney Museum, and the Morgan Library. He has illustrated over forty children's books, and received a Caldecott Honor for Pop Corn and Ma Goodness (1970). Although a note on the verso identifies this illustration as a New Yorker commission, it does not appear to have been published in the magazine. A striking image. Single sheet, measuring 12.5 x 10 inches. Ink and watercolor illustration, signed vertically along the lower left edge. Light smudge to top lefthand corner, ink note "New Yorker" to verso. (Inventory #: 1002662)
$850.00 add to cart or Buy Direct from Honey & Wax
Share this item
Honey & Wax Booksellers
Offered by