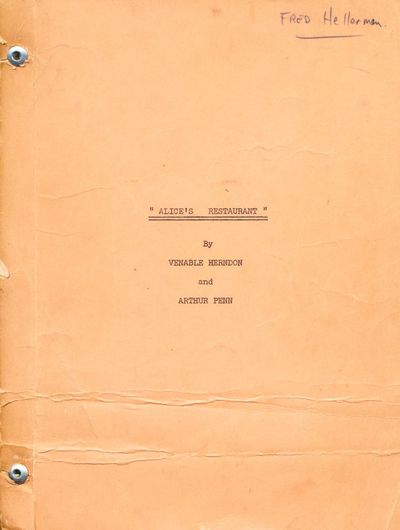 by [Guthrie, Arlo (sourcework)]: Penn Arthur [director and screenwriter], and Venable Herndon [screenwriter]
New York: Florin Corporation, 1968. [1],114 leaves (modified by lettered and revised inserts). Quarto. Mimeographed typescript, printed on rectos only of plain, blue, yellow, and salmon colored stocks. Bolt bound in mimeographed stiff wrappers. Wrapper somewhat creased, edgeworn and smudged, annotations throughout in pencil and ink, some occasional minor stains and frays, but a very good and important copy utilized in the production (see below). Denoted a "shooting script," but incorporating revisions spanning two months on colored and dated revises and inserts. This significantly used copy bears the ownership signature(s) and occasionally heavy annotations, music cues and highlighting of Fred Hellerman, music director for the production. Hellerman (1927 - 2016) was, with Pete Seeger, Lee Hays, and Ronnie Gilbert, an original member of the seminal American folk group, the Weavers. He produced the 1967 album by Arlo Guthrie that served as the sourcework for this film, ALICE'S RESTAURANT. Arthur Penn also directed the film and received an Oscar nomination for Best Director. The cast included Guthrie and Patricia Quinn in the lead, with Pete Seeger, Lee Hays, Emmet Walsh, and many others filling in a large and colorful cast. Penn and Herndon's script was nominated for a WGA Award. (Inventory #: WRCLIT83433)
$1750.00 add to cart or Buy Direct from
William Reese Co. - Literature
Share this item

Garden City : Doubleday, Page & Company , 1919
(click for more details about THE SCHOLARS)
View all from this seller>