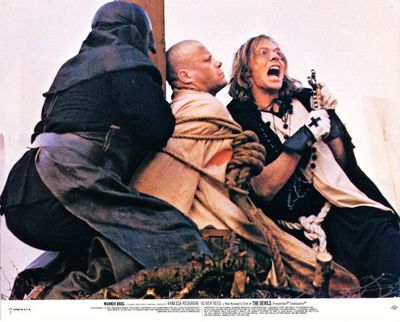 by [Huxley, Aldous (sourcework)]: Whiting, John (sourcework), and Ken Russell [screenwriter and director]
[Los Angeles]: Warner Brothers, 1971. Three 8x10 color small format lobby cards, with printed captions. Light use and multiple pinholes in extreme corners from display, ink note on one verso, very good. Three examples (#s 4,6 & 7) of the color mini- lobby cards issued to promote the controversial film treatment by Ken Russell of the historical record of Father Grandier and the alleged instances of possession among the Nuns of Loudon, based on Huxley's book and Whiting's play. Vanessa Redgrave, Oliver Reed, and Christopher Logue were among the players, and Derek Jarmon's set design is of considerable importance. The stills depict Grandier before the Inquisitors, Grandier bound to the stake under assault by the Chief Inquisitor, and Vanessa Redgrave's ecstasy prior to Grandier's death. (Inventory #: WRCLIT83434)
$50.00 add to cart or Buy Direct from
William Reese Co. - Literature
Share this item