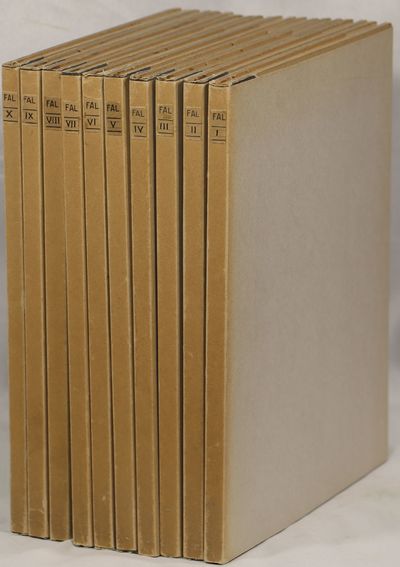 by Wall, Bernhardt
Lime Rock Conn[ecticut]: Bernhardt Wall, 1932. First edition. Hardcover. Near Fine. 10 vol. 4to. Unpaginated. Grey tape over grey boards lettered in black on each front board; grey dust jacket over each volume. Printed on hand-made paper. The title pages and copyright pages are etched. One volume contains an etching of the subscriber's list. Number 41 of 100 sets. Each volume contains five duotone etchings of Abraham Lincoln's life. The etchings are of the cabin where Lincoln was born, a map of the states he visited during his lifetime, his childhood farm, the rivers where he operated a ferry, and several other significant places from Lincoln's life. Each etching is signed in pencil by Wall. Each volume contains a small note signifying the plates were etched, printed, and bound in Lime Rock Connecticut. The first ten volumes of an eighty-five volume set. These volumes include a typewritten letter signed with a handwritten postscript by Wall. Wall is addressing the owner of these books (Ileen Bullis Campbell, whose bookplate is on each front pastedown of the volumes), explaining to her why she did not receive the first "installment" to the series. There is also a hand-written letter from Wall to Mrs. Campbell. This letter describes the pain Wall feels at having lost his wife, and he thanks Mrs. Campbell for her kindness in his time of grief. Laid in also: a receipt with an etching on it confirming Mrs. Campbell's subscription to the series, and an etched thank you note from Wall to Campbell, acknowledging the part his patrons played in helping him receive his honorary doctorate from Lincoln Memorial University at Cumberland Gap, TN. Texas Archival Resources Online: "Inventory of the Bernhardt Wall Collection". Born in New York, Bernhardt Wall was a famous printer and lithographer who came up under Dard Hunter's tutelage. He created etchings of famous American presidents and landmarks including Sam Huston, Mark Twain, several cities of the American West, and of course Abraham Lincoln. He etched three sitting presidents of the United States, and is an important figure in fine and private press history. A fascinating set of Lincolniana. A Near Fine set with one or two corners bumped and mild toning to the spine panels of the jackets. (Inventory #: 00008900)
$1,250.00 add to cart or Buy Direct from
Evening Star Books
Share this item