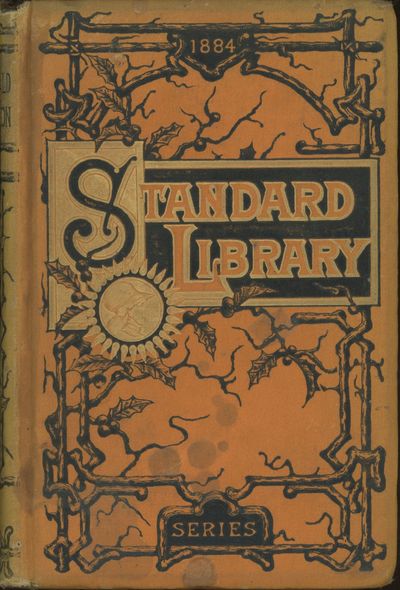 by Hawthorne, Julian
New York: Funk & Wagnalls, 1884. Octavo, pp. [1-5] 6-126 [127-144: publisher ads], fly leaves at front and rear, original decorated bevel-edged orange cloth, front and spine panels stamped in black and gold, yellow endpapers. First U.S. edition. The first printing with ad on page 144 headed "The Standard Library, 1884." Issued as part of Funk & Wagnalls' "Standard Library Series" in paper at 15¢ and in cloth (as here) at 75¢. This edition contains the same five-page "Introductory" section found in the Bentley first edition (and omitted from the later 1899 Funk & Wagnalls edition). Hawthorne's neo-Gothic horror novel ARCHIBALD MALMAISON, first published in 1879 in London by Richard Bentley and Son, is his most melodramatically effective work of fiction. "Hawthorne's most powerful horror story ..." - Sullivan (ed), The Penguin Encyclopedia of Horror and the Supernatural, p. 196. "Crowded with many Gothic manifestations, it arouses still the horror intended ... The story proved to be one of Hawthorne's most popular, both in England and America ..." - Bassan, Hawthorne's Son: The Life and Literary Career of Julian Hawthorne (1970), pp. 126-27. The author is at his most assured in this book, in perfect control of his material, and a pleasure to observe. A contemporary review in The London Times was typical of its reception abroad: "After perusal of this weird, fantastic tale, it must be admitted that upon the shoulders of Julian Hawthorne has descended in no small degree the mantle of his more illustrious father. The climax is so terrible, and so dramatic in its intensity, that it is impossible to class it with any situation of modern fiction. There is much psychological ingenuity shown in some of the more subtle touches that lend an are of reality to this wild romance." Barron (ed), Fantasy Literature 2-77. Locke, A Spectrum of Fantasy, p. 107. Bleiler (1978), p. 96. Not in Reginald (1979; 1992). Cloth worn at spine ends, corner tips turned, spine panel faded, several spots on front cover, two hairline cracks along inner front hinge, still a sound, good copy. (#165780) (Inventory #: 165780)
$150.00 add to cart or Buy Direct from L.W. Currey
Share this item
L.W. Currey Inc.
Offered by