The Double Helix: A Personal Account of the Discovery of the Structure of DNA. 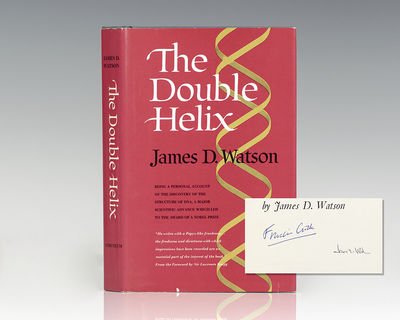 by Watson, James D. [Francis Crick]
New York: Atheneum, 1968. First edition of Watson's ground breaking work regarding the discovery of DNA for which the author, Francis Crick and Maurice Wilkins were awarded the Nobel Prize in Medicine in 1962. Signed by both James Watson and Francis Crick on the title page. Octavo, original blue cloth, with numerous diagrams and photographic illustrations. Fine in a fine dust jacket. Jacket design by Jeanyee Wong. Foreword by Sir Lawrence Bragg. Rare and desirable signed by both Watson and Crick. "Science seldom proceeds in the straightforward logical manner imagined by outsiders," writes James Watson in The Double Helix, his account of his codiscovery (along with Francis Crick) of the structure of DNA. Watson, Crick and Maurice Wilkins won Nobel Prizes for their work, and their names are memorized by biology students around the world. But as in all of history, the real story behind the deceptively simple outcome was messy, intense, and sometimes truly hilarious. To preserve the "real" story for the world, James Watson attempted to record his first impressions as soon after the events of 1951-1953 as possible, with all their unpleasant realities and "spirit of adventure" intact. "One of the investigators, more than any of the others, realized the decisive importance of the DNA molecules in biology, and it was this understanding which urged him relentlessly to push this work toward a successful conclusion, in spite of his rather modest technical qualifications for this task" (Mayr, 823). "He has described admirably how it feels to have that frightening and beautiful experience of making a great scientific discovery" (Richard Feynman, winner of the 1965 Nobel Prize for Physics). (Inventory #: 112545)
$16,000.00 add to cart or Buy Direct from
Raptis Rare Books
Share this item

The Life and Strange Surprising Adventures of Robinson Crusoe.

London : Printed for John Stockdale , 1790
(click for more details about The Life and Strange Surprising Adventures of Robinson Crusoe.)
View all from this seller>