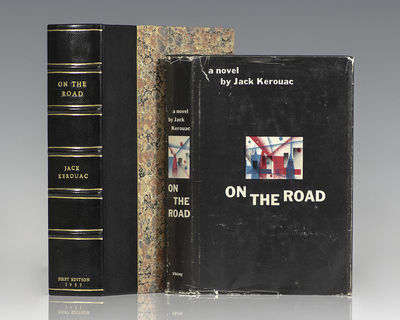 by Kerouac, Jack
New York: The Viking Press, 1957. First edition of Kerouac's classic novel. Octavo, original black cloth. Near fine in an excellent dust jacket with light rubbing, without the usual spine fading. Jacket design by Bill English. Housed in a custom half morocco clamshell box. A nice example. The raucous, exuberant, often wildly funny account of a journey through America and Mexico, Jack Kerouac's On the Road instantly defined a generation on its publication in 1957: it was, in the words of a New York Times reviewer, "the clearest and most important utterance yet made by the generation Kerouac himself named years ago as 'beat.'" Written in the mode of ecstatic improvisation that Allen Ginsberg described as "spontaneous bop prosody," Kerouac's novel remains electrifying in its thirst for experience and its defiant rebuke of American conformity. In his portrayal of the fervent relationship between the writer Sal Paradise and his outrageous, exasperating, and inimitable friend Dean Moriarty, Kerouac created one of the great friendships in American literature; and his rendering of the cities and highways and wildernesses that his characters restlessly explore are a hallucinatory travelogue of a nation he both mourns and celebrates. "On the Road has become a classic of the Beat Movement with its stream-of-consciousness depiction of the rejection of mainstream American values set in a physical and metaphysical journey across America" (Book in America, 136). It is the basis for the 2012 film featuring Garrett Hedlund, Sam Riley, Kristen Stewart, Alice Braga, Amy Adams, Tom Sturridge, Danny Morgan, Elisabeth Moss, Kirsten Dunst, and Viggo Mortensen. The executive producers were Francis Ford Coppola, Patrick Batteux, Jerry Leider, and Tessa Ross. Named by Modern Library as one of the 100 best novels of the twentieth century and on TIME Magazine's list of the 100 best English language novels from 1923-2005. (Inventory #: 111869)
$5,500.00 add to cart or Buy Direct from
Raptis Rare Books
Share this item