Rainbow. The Story of a Ukrainian Village Under German Occupation. 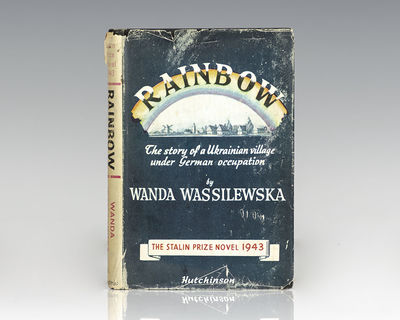 by Wassilewska, Wanda [Wasilewska]
London: Hutchinson & Co, 1945. First edition of this work by Wassilewska. Octavo, original cloth. Boldly signed by the author on the front free endpaper, "Wanda Wassilewska Kiev. XI.63." Near fine in a very good dust jacket with some chips and tears. Translated by Edith Bone. Although not marked in anyway, this is from the library of John and Elaine Steinbeck. Books signed by Wassilewska are rare. Wanda Wassilewska was a Polish and Ukrainian Soviet novelist and journalist and a left-wing political activist who became a devoted communist. She fled the German attack on Warsaw in September 1939 and took up residence in Soviet-occupied Lviv and eventually in the Soviet Union. She was the founder of the Union of Polish Patriots there and played an important role in the creation of the Polish 1st Tadeusz Kosciuszko Infantry Division. The division developed into the Polish People's Army and fought on the Eastern Front during World War II. Wasilewska was a trusted consultant to Joseph Stalin and her influence was essential to the establishment of the Polish Committee of National Liberation in July 1944, and thus to the formation of the Polish People's Republic. It was the basis for the 1944 Soviet war film directed by Mark Donskoy. The film depicts life in a German-occupied village in Ukraine from the viewpoint of the terrorized villagers. (Inventory #: 112421)
$2,000.00 add to cart or Buy Direct from
Raptis Rare Books
Share this item

Maldon : The Free Age Press , 1900
(click for more details about Patriotism and Government.)
View all from this seller>