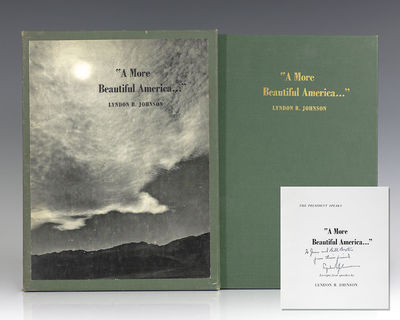 by Johnson, Lyndon B. Photographs by Ansel Adams
Washington, D.C: Government Printing Office, 1965. First edition of this collection of speeches from President Lyndon Johnson. Quarto, original cloth, illustrated with photographs by Ansel Adams, 'A Message on Natural Beauty by Lyndon Baines Johnson' inserted into a pocket affixed to the verso of the rear panel. Association copy, inscribed by the author on the title page, "To Jean and Bill Baxter from their friend Lyndon B. Johnson." The recipients, Rev. William M. Baxter and his wife Jean were close friends of Lady Bird and Lyndon B. Johnson who had attended Baxter's services since his days as Senate majority leader and continued to do so throughout his presidency. The Johnson family attended Baxter's Sunday morning service at St. Mark's Episcopal Church in Southeast Washington two days after Johnson took the presidential oath aboard Air Force One in Dallas, following the assassination of President John F. Kennedy. They stayed after the sermon for coffee hour for only one half-hour before Johnson was spirited away by the Secret Service moments after the subsequent assassination of Lee Harvey Oswald. The sermon Baxter delivered at the service was televised nationwide and is now preserved in the National Archives. Fine in the original pictorial slipcase which is in near fine condition. Lyndon Baines Johnson was an American politician who served as the 36th President of the United States from 1963 to 1969, assuming the office after serving as the 37th Vice President of the United States under President John F. Kennedy from 1961 to 1963. A Democrat from Texas, he previously served as a United States Representative from 1937 to 1949 and then as a United States Senator from 1949 to 1961. He spent six years as Senate Majority Leader, two as Senate Minority Leader, and two more as Senate Majority Whip. (Inventory #: 110717)
$1,100.00 add to cart or Buy Direct from
Raptis Rare Books
Share this item