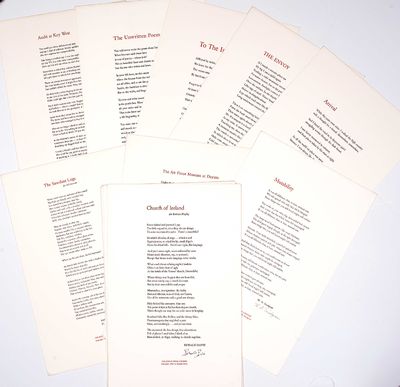 The publisher of Palaemon Press is Stuart Wright (b. 1948-). Wright founded the Press in Winston Salem, North Carolina, in 1977. The Press published books, pamphlets and broadsides, primarily by Southern authors, and in most cases offering the first printing or first separate appearance of the work Most of the press' offerings were limited editions, but in the later years it published trade editions as well. Palaemon Press published its last works in 1985.

Wright also published works under his own name. Stuart Wright was born in Roxboro, North Carolina, graduated from Wake Forest University with a B.A. degree in German and Music. Wright later completed two master's degrees at Wake Forest. Wright had a long career teaching at Wake Forest. He also was an important publisher of bibliographical works on American authorincluding those of Donald Davie, James Dickey, Richard Eberhart, William Goyen, Randall Jarrell, Andrew Lytle, Walker Percy, Peter Taylor, as well as checklists of the writings of Henry Taylor, Robert Morgan and Charles Wright. Wright was also a major collector of books and manuscripts of American authors, mainly from the South. His collection was donated to Eastern Carolina University in 2011. Wright's personal paper have been donated to Duke University's Rubenstein collection (Inventory #: 983808)
$1,500.00 add to cart Available from Golden Legend
Share this item
Golden Legend, Inc.
Offered by