The History of Cartography, Volume One: Cartography in Prehistoric, Ancient, and Medieval Europe and the Mediterranean 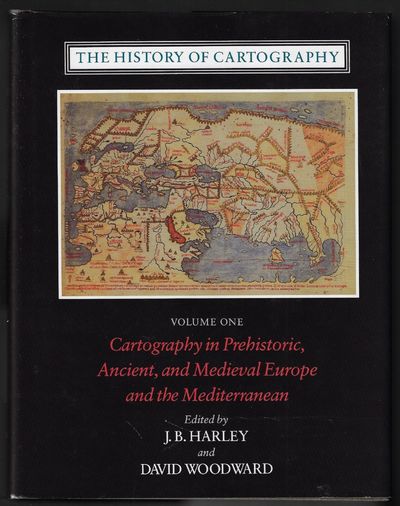 by Harley, J.B.; Woodward, David
Chicago: University of Chicago Press, 1987. Hardcover. Near fine/near fine. 599 pp, indexed and extensively illustrated. Previous owner's name written on front pastedown, otherwise as new. Dust jacket has some scratches on the front panel, old price sticker on the back. Due to weight, shipping cost will be more than standard for priority or international orders. "The History of Cartography ... is the most ambitious overview of map making ever undertaken .... People come to know the world the way they come to map it-through their perceptions of how its elements are connected and of how they should move among them. This is precisely what the series is attempting by situating the map at the heart of cultural life and revealing its relationship to society, science, and religion.... It is trying to define a new set of relationships between maps and the physical world that involve more than geometric correspondence. It is in essence a new map of human attempts to chart the world" (New York Times review). This first volume presents a critical synthesis of mapping in Europe and the Mediterranean basin from its earliest prehistoric manifestations through the High Middle Ages. Includes discussion of the petroglyph maps of prehistoric Europe, mapping in ancient Egypt and the Near East, and the theoretical and practical cartographic achievements of classical antiquity (via a systematic review of Greek, Roman, and Byzantine maps). (Inventory #: 20894)
$115.00 add to cart or Buy Direct from Walkabout Books
Share this item