The History of Cartography, Volume Two, Book One [1]: Cartography in the Traditional Islamic and South Asian Societies 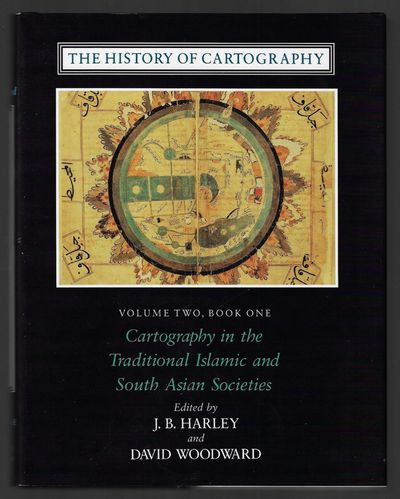 by Harley, J.B.; Woodward, David
Chicago: University of Chicago Press, 1992. First Edition. Hardcover. Near fine/Fine. 579 pp, indexed and extensively illustrated. Previous owner's name written on front pastedown, otherwise as new. Due to weight, shipping cost will be more than standard for priority or international orders. "The History of Cartography ... is the most ambitious overview of map making ever undertaken .... People come to know the world the way they come to map it-through their perceptions of how its elements are connected and of how they should move among them. This is precisely what the series is attempting by situating the map at the heart of cultural life and revealing its relationship to society, science, and religion.... It is trying to define a new set of relationships between maps and the physical world that involve more than geometric correspondence. It is in essence a new map of human attempts to chart the world" (New York Times review). According to the jacket, "Volume 2 of the History of Cartography focuses on mapping in non-Western cultures, an area of study historically overlooked by Western scholars. Extensive original research makes this the foremost source for defining, describing, and analyzing this vast and unexplored theater of cartographic history. Book 1, offers a critical synthesis of maps, mapping, and mapmakers in the Islamic World and South Asia." (Inventory #: 20893)
$250.00 add to cart or Buy Direct from Walkabout Books
Share this item

In a Narrow Grave, Essays on Texas

Austin : Encino Press , 1968
(click for more details about In a Narrow Grave, Essays on Texas)