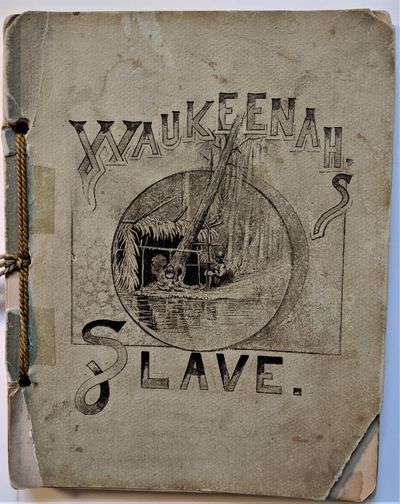 by Summers, T.O.
New York: Carlton Renard, 1891. 8vo. 175 x 130 mm., [7 x 5 ½ inches]. [2], 43 leaves. Illustrated with 18 original illustrations on card stock by Horace W. Wightman. Original decorated stiff boards, text sewn with decorative cord; upper wrapper chipped at lower corner and at spine, wrapper stock soiled; wrappers expertly repaired. Set in the swamps and bayous of southern Florida and the city of St. Augustine, the legend begins with the following summary; "It is said that a short time ago and Indian Chief appeared on the streets of St. Augustine accompanied by an old negro man. After viewing the wonderful Ponce de Leon Hotel, and the ancient Fort, he tried to sell the slave; but upon being informed that slavery was a thing of the past, he offered the negro his freedom and returned to his home in the Everglades." The legend is illustrated with wonderful vignettes of the history of south Florida, beginning with the conquistadors and continuing to present with image of the city of St. Augustine and its environs. Horace w. Wightman's clear and delicate hand produced these charming images. Thomas Osmond Summers [1812-1882] was a Methodist Episcopal minister who became the Dean of the Biblical Department at Vanderbilt School of Divinity in 1878. He wrote a number of essays against slavery and contributed numerous articles, essays, editorials and revisions to publications of the M.E. Church. Over his career Summers was involved with the administration of the Baltimore, Virginia, Texas, and Alabama conferences until his appointment to Vanderbilt. This text is beautifully printed reflecting the book design trends of the 1890's. The text and image are printed entirely from lithographic stones giving the volume a very contemporary feel. Publisher's Weekly, December 13, 1890. Harris Collection of American Poems and Plays, listing edition printed in 1890, 1891 1897 and 1921. Appleton's Cyclopedia of American Biography V, p. 744. (Inventory #: 465)
$275.00 add to cart Available from
De Simone Company
Share this item
De Simone Company, Booksellers
Offered by