News is a Singular Thing 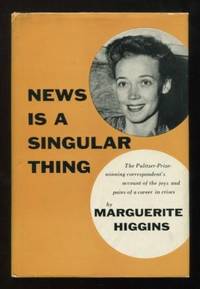 by Higgins, Marguerite
Garden City NY: Doubleday & Company, Inc.. Near Fine in Near Fine dj. 1955. First Edition. Hardcover. [very nice clean copy, just minimal wear to book and jacket]. "Where Maggie goes . . . news happens." Very scarce memoir of "the joys and pains of a career in crises," by this noted international reporter, who first became a war correspondent in 1944, at the age of 24, when she persuaded her employer, the New York Herald Tribune, to send her to Europe ; she was first stationed in London and Paris, and was finally sent to Germany in the waning days of World War II. She got there in time to witness the liberation of Dachau, but too late to cover any major front-line action. She had no such problem when the Korean War came along, however: then stationed in Tokyo, she was one of the first reporters in country (at great personal peril). Her coverage of the war earned her wide recognition, along with the Overseas Press Club's George Polk Memorial Award and a share (with five of her male colleagues) of the 1951 Pulitzer Prize for International Reporting, the first woman to be thus honored. (Her book about the experience was entitled "War in Korea: The Report of a Woman Combat Correspondent.") She continued to cover the international beat until her untimately death in 1965 at the age of 45; her final book, published that year, was "Our Vietnam Nightmare." . (Inventory #: 24981)
$150.00 add to cart Available from ReadInk
Share this item
ReadInk
Offered by