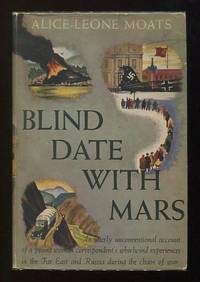 by Moats, Alice-Leone
Garden City NY: Doubleday, Doran and Company, Inc.. Near Fine in Very Good+ dj. 1943. Later Printing. Hardcover. [very nice copy, light age-toning to edges of text block but no significant shelfwear, one-time owner's signature on ffep; jacket shows only minor wear to extremities and edges, a handful of itsy-bitsy closed tears and minor nicks]. "An utterly unconventional account of a young woman correspondent's whirlwind experiences in the Far East and Russia during the chaos of war." Miss Moats (1908-1989), a well-born young lady who was educated in Mexico City, New York, Rome, Paris and South Carolina, began her professional writing career in 1933. She became an international reporter of sorts -- although she avers that "in no sense of the word was I ever a big-time foreign correspondent" -- when she was commissioned by Collier's magazine "to get inside Russia and report on that country from the feminine viewpoint." She did go to Moscow, but along the way she passed through Japan and China, and on the way back made stops in Persia, Egypt, and West Africa. All of that informed this book, in which "the reader follows her breathless career through diplomatic circles and the orgies of relaxing warriors to her personal reactions to the great and near great of our polyglot war effort." Following the war, she wrote numerous pieces for the Saturday Evening Post, Ladies Home Journal, Vogue, Harper's Bazaar, the New Yorker, Life and Time; at various junctures, she also worked in Rome for Newsday, and in France for Le Monde. For the last twelve years of her life, she wrote a popular column for the Philadelphia Inquirer. . (Inventory #: 20725)
$100.00 add to cart Available from ReadInk
Share this item
ReadInk
Offered by