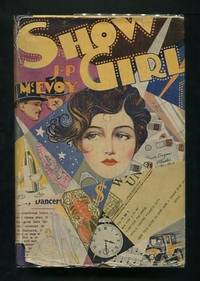 by McEvoy, J.P.
New York: Simon and Schuster. Very Good in Good dj. 1928. 5th/6th printing. Hardcover. [upper corners bumped and slightly worn (minor exposure of boards), some wear to cloth at spine ends; jacket worn and dog-eared along bottom edge, minor paper loss at top of spine, small chip at bottom front hinge, faint dampstaining to rear panel]. One of the more well-known entries in what might be called the "ambitious-girl-makes-good-and-writes-home-about-it" genre of comic novel, this relates the showbizzy adventures of Dixie Dugan, "the hottest little wench that ever shook a scanties at a tired business man." The tale is told in a narrative mash-up consisting of telegrams, news articles, vaudeville blackout skits, business letters, and letters to and from Dixie's boyfriend back home in Muncie, Indiana. Both this book and its follow-up, "Hollywood Girl," were adapted for the movies, and by the end of 1929 a "Dixie Dugan" newspaper comic strip had made its debut. One more movie version appeared in 1943, and the character also had a decent run in comic-book format from 1942 to 1954 (first as strip reprints, but with original stories in the later years). It was the newspaper strip that ultimately lasted the longest, however, finally ending its run in 1966. (NOTE that the book is a stated "Fifth printing, August 1928," just one month after the first, but "Sixth Printing" is stated on the front jacket flap. The rear panel is filled with laudatory critical quotes, and the tail end of the jacket blurb notes the pending production of a motion picture adaptation; the resulting film was released just a month later, in September 1928. They didn't waste time in those days!) . (Inventory #: 19456)
$150.00 add to cart Available from ReadInk
Share this item
ReadInk
Offered by